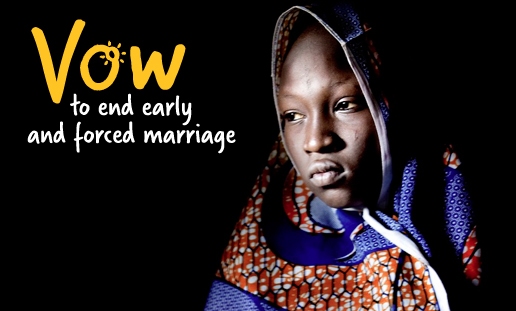 Plan UK’s “Because I am a girl campaign”

The charity Plan UK would like your support for the ‘Because I Am A Girl Campaign’ being launched asking the UK public and government to #TaketheVOW by signing an online petition to end early and forced marriage.

You might have already heard about the campaign (which went live yesterday) as The Guardian very recently published a story on it, “10 million child brides each year, charity warns: UK must help to cut level of forced marriages for girls under 18” (25/06/11).

Plan UK wants to inform you of the launch because the campaign will have more impact with the support of influential feminist bloggers like yourself. We hope that the issue of early and forced marriage is of interest to you and your followers and that you will back our campaign.

Lend your voice through a quick and simple action of ‘taking the vow’ today, in support of raising the voices of the millions of girls married young, against their will in the developing world.

One girl is married off every three-and-a-half seconds worldwide. We think forcing girls to marry young is wrong. Please help put a stop to this.

Help us spread the word about our #TaketheVOW action on Twitter – we’re hoping you take your vow before millions of girls in the developing world are forced to take theirs.

** Take your vow at www.becauseiamagirl.org/vow

** Please use our Twibbon, Facebook and blog badges to show your support!

** Use #takethevow to tell friends about the vow and urge them to take theirs!