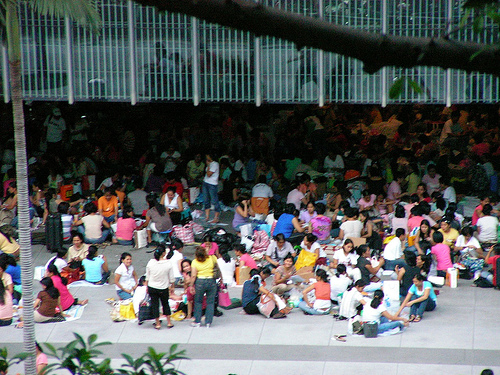 Today is the first day of the 100th International Labour Conference in Geneva. At this session, comprehensive standards for “Decent work for domestic workers” will be discussed and hopefully adopted. Various migrant workers’ organisations are calling for International Labour Organisation members to recognise the importance of respecting domestic work as the valuable labour that it is, and treating the (mostly) women who do it with the dignity they have long been unjustly denied. Via United for Foreign Domestic Workers, statements from the Indonesian Migrant Workers’ Union (IMWU) and Filipino Migrant Workers’ Union (FMWU) to the government of Hong Kong, where there are over 300,000 migrant domestic workers; and CARAM, which operates from a number of countries in Asia. Domestic workers in Thailand have also organised to press the government for measures to better protect the rights and welfare of about 129,000 migrant domestic workers there:

Nevertheless, the working and living conditions of domestic workers have not improved and developed at the same rate. Domestic work is still not recognized under the law as work and is only acknowledged in the informal sector, a sector where all workers lack protection of their rights. Consequently, domestic workers have no assurances about the practices of the employers, their wages, or living and working conditions. There are no protection mechanisms to guarantee domestic workers fundamental rights such as weekly holidays, annual holidays, working hours, fair wages, safe work environment and private accommodation in the employer’s home. Domestic workers are mostly women, both young and old, who are easily at risk of sexual harassment and abuse by their employers. It can be said that domestic workers in Thailand are a vulnerable group whose rights are at constant risk of being violated which is a human rights violation and is contradictory to the Decent Work Agenda initiated by the International Labour Organization (ILO).

Visit the Kalayaan website to find out more about migrant domestic workers in the UK.