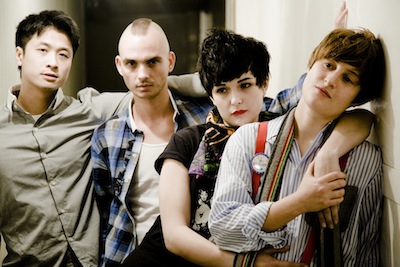 London filmmaker Kanchi Wichmann’s courageous debut feature, Break My Fall, tells the story of the last three days of a spent relationship. 20-something couple Liza (Kat Redstone) and Sally’s (Sophie Anderson) life together is on the rocks and, even though they both know it, they choose to look elsewhere and avoid the inevitable.

“Elsewhere” means that Liza spends more time at music college and commits herself to keeping Blanket, her and Sally’s band, intact. Whilst Liza is away, after a particularly heavy night of partying, Sally decides to take her friendship with her best friend, a straight rent boy Vin (Kai Brandon Ly), to a more intimate level. At the same time Liza’s friend Jamie (Collin Clay Chace) does everything he can to keep things spiraling out of control for his friend, all the while dreaming of leaving his dead-end cabaret bar job and settling down with a nice man.

Harking back to the aesthetic of those early 1980s New York radical independents, Wichmann gives a genuine evocative feel and rooted sense of an alternative space in the city

The film is at times difficult to watch – as Wichmann honestly portraits four messy, unkempt lives on the tipping balance between change and self-destruction – but it is also heart-wrenching, at times funny and absorbing as we are taken on a journey of East London late night squats, girl-rock gigs, free-wheeling biking and absurd greasy spoons.

Harking back to the aesthetic of those early 1980s New York radical independents (Lizzie Borden, Jim Jarmusch and Bette Gordon), by choosing to shoot on Super 16mm, Wichmann and her cinematographer Dawid Pietkiewicz give a genuine evocative feel and rooted sense of an alternative space in the city.

One of the strongest scenes in the film is a slowed down, non-verbal morning after scene in the couple’s flat reminiscent of an early Chantal Akerman in its bold studied pacing, subtle suspense and a careful observation of daily detail of a lesbian couple in crisis. 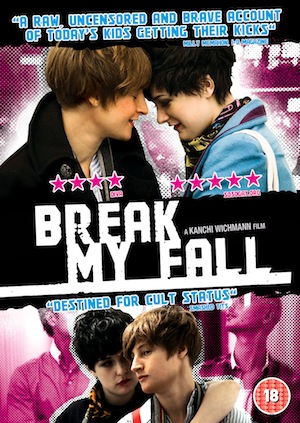 The two leads’ opposing temperaments play off well together, with Anderson (Sally) as the more emotional and directionless against Redstone’s (Liza) more controlling and self-contained personality. Together the actresses bravely explore the difficulties, co-dependency and out of control emotions that make up the end of their relationship. This is certainly not ‘dyke life’ we are fed onThe L Word or Lip Service.

The film also boasts a strong lineup of UK independent bands – some old (The Raincoats), some new (Peggy Sue). Opening in the wake of the global domination of the Harry Potter franchise takes some guts, but distributor Peccadillo Pictures have been savvy with their release date choice. Break My Fall is a wholly independent feminist artisanal film that has a rich history in this country (Sally Potter) and spurred on by the buzz at its world premiere at the 2011 London Lesbian & Gay Film Festival in April, Wichmann and her crew should feel proud to let their gem of a film fly.

Click to book tickets to Break My Fall at the Apollo Cinema, Piccadilly today

and for future dates here.

Selina Robertson along with Sarah Wood runs Club Des Femmes, a queer-feminist film club/festival/pop up event. She is a freelance programmer and journalist and currently lives in Berlin. The last film she watched was the documentary about Motörhead’s Lemmy, which she loved.