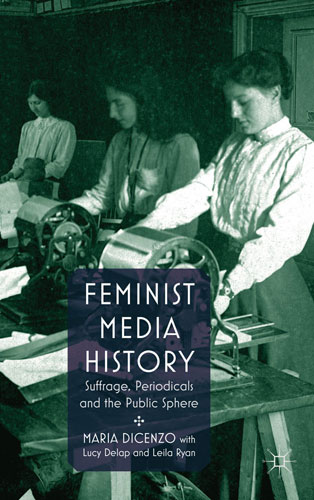 Red Chidgey reviews a book focusing on the feminist periodicals which emerged from the campaign for women’s right to vote, highlighting the central role of grassroots publications to engage the wider public

Considering how important independently-made media can be for feminist movements – it can be argued that grassroots publications are the lifeblood of any mobilisation, allowing women and their allies to speak in their own words and to connect supporters together – it seems rather curious that little critical work has been done on analysing such sources as part of feminist history. Thankfully, a new book by Maria DiCenzo with Lucy Delap and Leila Ryan, Feminist Media History: Suffrage, Periodicals and the Public Sphere, seeks to reclaim women’s radical publishing histories and to place activist media back on the map.

Focusing on periodicals from Edwardian society, when the first-wave of suffrage agitation hit new heights, this fascinating book combines original research into publications such as Votes for Women, The Common Cause, the Englishwoman and the Freewoman, with a sturdy look at social movement theory, press history and contemporary media studies.