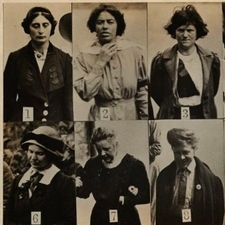 Scotland Yard gets first camera to snoop on Suffragettes

“In 1912, Scotland Yard detectives bought their first camera, to covertly photograph suffragettes. The pictures were compiled into ID sheets for officers on the ground.”

How to Be a Retronaut attributes this quote to the BBC. It then posts a whole selection of photos which the police compiled of the Suffragettes in 1913.

This BBC story from 2003, presumably Retronaut’s source, explains how police surveillance was born as a tactic to track the suffragettes:

Documents uncovered at the National Archives reveal that the votes-for-women movement probably became the first “terrorist” organisation subjected to secret surveillance photography in the UK, if not the world.