When I heard that Wendy McClure’s latest book explores her obsession with Laura Ingalls Wilder, author of the Little House on the Prairie series of books, I admit I was disappointed. McClure’s first memoir I’m Not the New Me was an honest exploration of weight and self-esteem which refused to wrap things up in a conventional “being thin makes everything OK” narrative. Meanwhile, her column in BUST Magazine looks at pop culture from a wry feminist perspective.

I didn’t know much about Ingalls Wilder’s collective works, but I did know it comprised a series of children’s books based on her childhood and adolescence growing up and moving around in the US Midwest in the late 19th century. I suspected it reflected the social conventions, racial ignorance and gender stereotypes of the time, and couldn’t understand why any progressively minded, modern woman would want to waste her time revisiting books like that. I pegged McClure’s interest as nostalgia; an antifeminist indulgence. It turns out I had underestimated both Wendy McClure and Laura Ingalls Wilder.

The Little House books have been a mainstay on the bookcases of US girls since they were first published in the 1930s and their status as classics was cemented by their adaptation into a TV show in the 1970s. Growing up, McClure loved them so much that she pledged that if she ever had a daughter she would name her Laura. One reason she was so enamoured with the books was that they, as she puts it: “Reconciled all the little contradictions of my modern girlhood.” That is, they showed it was possible to have long hair and wear dresses and still enjoy the same things boys did, like fishing or riding bareback.

McClure rejects the often-repeated notion that Laura is a ‘tomboy’, as she doesn’t seem to want to imitate boys. Rather, the Laura of the books is just less confined by gender expectations than many modern heroines. What’s more, she isn’t preoccupied with her looks or finding a boyfriend, but with struggling to be a good person and her relationships with her friends and sisters. “A lot of what I learned about being a girl came from Laura Ingalls,” claims McClure.

McClure began thinking about the books again after she found her old copy of the first in the series, Little House in the Big Woods, at her childhood home a few months before her mother died. A year later, she decided to re-read it for comfort during a cold Chicago winter. Not only did she remember how much she loved it the first time, but those feelings came flooding back: an enjoyment of the stories and a longing to experience the same things as Laura, to enter what McClure calls “Laura World”. McClure means not only the world of the books, but the physical and emotional space the real Laura occupied. When her boyfriend Chris then bought her the full set of books from a garage sale, he became an unwitting accomplice in what turned into a full-on obsession.

Eventually, she realised she would never be able to enter ‘Laura World’ from the comfort of her living room and made plans to follow in Ingalls Wilder’s wagon tracks

At first it was low-key: McClure re-read all eight books as well as Ingalls Wilder’s posthumously-published diaries, got stuck into several biographies and Googled the various Ingalls family home sites. But soon she was filled with the need to emulate “La Vida Laura”, and tried her hand at churning butter and making some unsatisfying-sounding bread from a Little House recipe book.

She watched the TV show for the first time, declaring it a disappointing facsimile and discovered a 26-part Japanese anime Little House adaptation from 1975. She even set up a Twitter account on behalf of Laura, providing an odd but entertaining mash-up of 19th century history and 21st century technology.

Eventually, she realised she would never be able to enter “Laura World” from the comfort of her living room and made plans to follow in Ingalls Wilder’s wagon tracks. She’s not the only one: the books inspired a few pilgrimages while Laura was alive, but once the TV show became popular, Little House tourism boomed into a big business. McClure knew she was following a well-worn path, but she longed for a more hands-on experience, saying: “At some point it wasn’t enough to revisit the familiar memory landscape I’d known; now I had to know what the twisted hay-sticks the Ingalls family burned during The Long Winter looked like.” 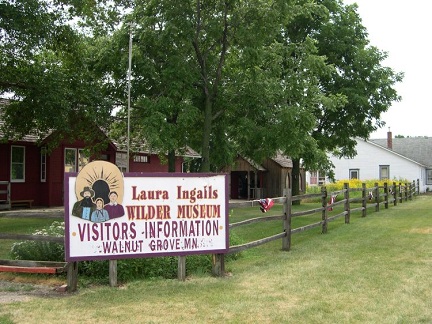 She and Chris began by travelling to Ingalls Wilder’s birthplace just outside Pepin, Wisconsin but found it underwhelming. Disappointed, McClure wondered if she was on a fool’s errand until they passed Lake Pepin the following day and it was frozen over, just like it was when Pa Ingalls drove his wagon over it more than 100 years earlier. McClure was transported to another time, saying: “I hadn’t expected I would find something like an opening into Laura World; that I would come this close.”

Encouraged to continue, she then visited Rocky Ridge Farm in Missouri, where Ingalls Wilder started writing the books aged 61 and died 29 years later, before heading to upstate New York to see where Ingalls Wilder’s husband Almanzo (the subject of the one non-Ingalls book in the series, Farmer Boy) grew up. She travelled to Minnesota and paddled in Plum Creek just as Laura and her family once did. And at the Ingalls Homestead in De Smet, South Dakota, which is the setting of By the Shores of Silver Lake, Wendy and Chris stayed in a replica covered wagon and she finally got the chance to twist a hay-stick of her own.

But her favourite place, appropriately, was the original little house on the prairie in Kansas. A replica cabin has been built on the site of the family’s home, plus a replica post office, a schoolroom and a museum, which McClure finds a heady experience: “Finding myself in a room — nearly a whole house, even — of Laura Ingalls Wilder stuff was such a trip that for a moment or two I sort of forgot about the cabin outside.”

Rediscovering, and to some extent reliving, the books clearly meant so much to McClure that it would almost be understandable for her to gloss over their problematic portrayal of race, but to her credit she touched on the topic.

Not only do the books feature an allegedly ‘hilarious’ scene featuring Pa in blackface, but Ma is also notoriously quoted as saying: “The only good Indian is a dead Indian.” I appreciate that McClure addressed this, but I think it merited more discussion. It’s easy for a white adult to be offended by, but able to overlook such insults; how might a child – especially a black or Native American child – feel when reading them? Still, I appreciate that McClure took on the topic and it gives her book credence that she’s able to recognise the flaws of the Little House books as well as their charms.

Because her mother moved around a lot as a child, she had always conflated her with Laura in her mind. Re-reading the books was not just about recreating McClure’s own childhood, but about finding a connection to her mother’s

One of the biggest shocks for McClure is when she discovers just how much the books have bent the truth. During her research about the family, she finds that they left the places described in Little House in the Big Woods when Ingalls Wilder was three, so it couldn’t have been an accurate depiction of real events. “Even though I’d always known the book was a novel, I nonetheless realised that all this time I’d truly, wholly believed that all the details of this book were from memory,” she says.

She also discovers that the books omitted several years of Ingalls family history, in which Mary became blind, Ma gave birth to a boy who died and the family skipped out on a debt in the middle of the night. McClure’s research finds that Ingalls Wilder wrote to her daughter Rose, who helped her edit these sections of the books, stating that this time in her life “does not belong in the picture I’m making of the family”.

McClure was also surprised to discover that some readers have interpreted the books in ways that Ingalls Wilder surely did not intend. In one entertaining and eye-popping encounter, she attends what she thinks will be a weekend of Ingalls-style homesteading skills such as soap-making and yarn-spinning; but instead finds herself surrounded by a religious group preparing for the apocalypse, whose members keep trying to corner her to discuss “the end of days”. Talking to some of the visitors at the home sites, she learns that they are a magnet for Christian homeschoolers, who consider the books an archetype of old-fashioned family values and religious morality, despite them being light on dogma. 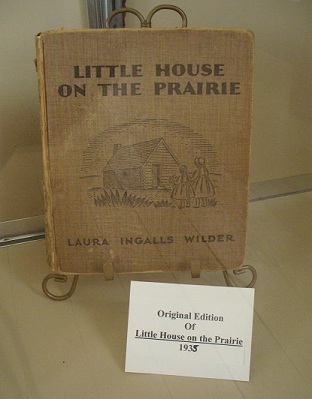 For McClure, the message of the books is not as important as the feelings they evoke. “Sometimes, Laura World wasn’t a realm of log cabins or prairies,” she says. “It was a way of being. Really, a way of being happy.”

As her travels came to an end and she packed away her messy hay-stick in the spare room closet, she considered why Ingalls Wilder has been the pathway to her rediscovering a sense of childlike wonder. When one of her friends asks her: “Do you think there’s something you’re trying to figure out with all this?” McClure is forced to admit that while she tried to pass off her interest in Laura as a quirky hobby, it’s much more than that. Because her mother moved around a lot as a child, she had always conflated her with Laura in her mind. Re-reading the books was not just about recreating McClure’s own childhood, but about finding a connection to her mother’s.

It was also perhaps necessary in processing her decision not to have a family of her own; accepting that she would never have a daughter named Laura, nor would she pass along her love of the books to a new generation. In one of Laura’s old stomping grounds, McClure muses: “I’ve never really regretted being childless, but it started to feel different after my mother died, in a way I couldn’t describe. But here in Walnut Grove I knew what it was: I felt invisible sometimes. Not ignored, but anomalous and ghostly. I wasn’t the girl anymore, and I wasn’t the Ma.” While the book is often funny and educational, it’s this sense of personal meaning that makes the retelling of McClure’s quest more than just another novelty memoir.

I wouldn’t recommend The Wilder Life to total Ingalls novices who will have no frame of reference, but you don’t need to be a Laura know-it-all to enjoy it – my vague recollections of the TV show were enough for me to understand what McClure was talking about (although I really would have appreciated a map of her route). Anyone who knows the books inside out and who grew up loving the work of Laura Ingalls Wilder is sure to adore it, and to find it a passionate yet considered tribute to one of the best-loved children’s authors of all time. Above all, it’s a testament to the impact of the books we love as children and an illustration of their enduring appeal.

Image of the Laura Ingalls Wilder museum in Walnut Grove, Minnesota, US, shared by swg92 on Flickr under a Creative Commons license.

Image of original edition of Little House on the Prairie shared by Krista76 on Flickr under a Creative Commons License.