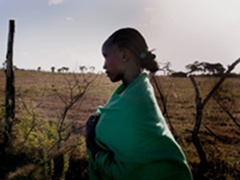 From the Horn of Africa to the Western shores of the sub-Saharan nations, everyday 6,000 girls are subjected to a practice called female genital mutilation or FGM. And everyday with little more than fierce determination and deep love for their communities, brave activists are leading the path against all odds to break the silence about this centuries-old tradition. Together, these women and men have created a formidable grassroots movement to end FGM. Africa Rising is an extraordinary film presenting an insightful look at the frontlines of a quiet revolution taking the African continent by storm.

Masterfully directed by Paul Heredia, Africa rising paints an intimate portrait of courageous indiviuals with dignity and strength, whose passion for justice is changing the course of history. The film celebrates girls like Beatrice and Edna Kandie, who fled their home after learning their father was planning to cut them, and succeeded in getting a court protection order against him; the film also features the moving story of Fanta Camara from Mali, who despite years of suffering from injuries as a result of FGM, blossoms into a bright, young woman. Other girls, however, have faced ultimate tragedy, such as Tato, a female anti-FGM activist who lost her life to FGM.

Covering rural stories from accross the continent, Africa Rising will leave the viewer cheering for those unlikey heroes who share their conviction that ending female genital mutilation is within our reach and visible on the horizon.

Naana Otoo-Oyortey MBE, Director of Forward and Efua Dorkenoo from Equality Now who helped to make the film will also be speaking. Efua will give an introduction into the film and will also be able to answer questions about what is happening now.

Africa Rising will be showing at the Bristol Indymedia film night at the Cube cinema, Dove St, Bristol. BS2 8JD, on the 5th Sept 2011 at 8pm and entry is £3, £4 but nobody refused for lack of funds.