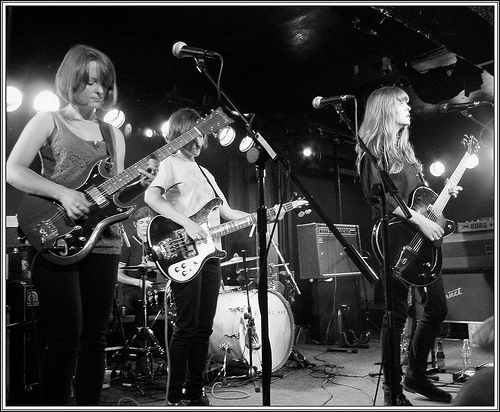 You can keep your summer Britpop reunions and your behemoth boyband showdowns. Nostalgia is all very nice, but there was one bit of news that genuinely got me in a fizz this year. Electrelane are back! It might be short, it’s bound to be sweet, but for those of us who never managed to catch the band first time around, it’s Christmas come early.

To be fair, they were only gone for three years, which barely warrants a ‘reunion’ stamp. The multi-talented quartet bowed out for a quick breather after a 10-year career making a racket with krauty noise-rock, epic instrumental soundscapes and sepia-tinged wonky pop. Something of a cult following has swelled in Electrelane’s wake, their impact only really becoming clear in their absence.

Formed in Brighton by multi-instrumentalist, multi-linguist Verity Susman and drummer Emma Gaze, Electrelane built a dedicated following in their home town, releasing singles through Fierce Panda and their own label, Let’s Rock! before putting together their largely instrumental debut album.

Eventually joined by guitarist Mia Clarke and bassist Ros Murray, they released Rock It To The Moon on Mr Lady Records, a San Francisco-based feminist independent record label. Second album The Power Out was a leap forward and a critical success, as the band experimented with more complex structures, vocals and cultural references. That and back-to-basics follow up Axes Saw the band bringing in producer Steve Albini, whose legendary touch has helped many a band develop the extra swagger they need to take on the world. By the time they released No Shouts No Calls the band were winning fans around the globe. We’re not talking stadiums here, but Electrelane became a byword for a jaunty sort of cool.

A precise but visceral style characterises Electrelane’s music. Repetitive riffs and restless rhythms are overlaid with a DIY aesthetic and nod to a Riot Grrl spirit. They never stop experimenting, layering sounds and textures, flipping between instruments and languages. There’s a sense of purpose about their lyrics, which draw from Catalan sonnets, First World War poetry and existential literature. By contrast, songs like The Birds cut to the bone with youthful heartbreak and paranoia.

The band are focused and intense as ever but there are small smiles as the band gets into its groove: they’re enjoying themselves

True to form, the ladies have used their three-year break to travel, embark on PhDs and pursue their own creative projects. They return to a hero’s welcome: King’s Cross is buzzing with anticipation this damp July evening.

Mia, Verity, Emma and Ros emerge onstage to set up their gear and open cans of beer before shuffling back into the wings. They reappear to rapturous cheers.

They open with a thunderous Gone under the sea, Verity setting the tone with headbanging piano flourishes. To the East builds an elegant momentum while Birds gets a huge cheer, then a big and sexy On Parade prompts a chorus of happy yelps from the crowd.

Fully warmed up, Mia slips into some guitar theatrics during Long Dark and Verity steps out from behind the keys to claim the stage, her impressive auburn mane a theatrical swirl.

The band are focused and intense as ever but there are small smiles as the band gets into its groove: they’re enjoying themselves. So is the crowd. Only One Thing is Needed gets plenty of people pogoing around in the dry ice while indie kids smooch in the shadows.

Emma and Ros don’t miss a beat all evening, churning out smouldering rhythms and chippy beats. Mia demonstrates her guitar skills, at one point sprawling nonchalantly across the amp to coax some crazy sounds out of the instrument. And Verity is an imposing presence, orchestrating the mood of each song, her arresting vocals stronger than ever.

It’s like greeting old friends from overseas, hearing these songs live: songs that have been confined to headphones and dusty CD collections for far too long. There’s no new material on offer tonight, so the band are free to focus on past gems. The set draws mostly from The Power Out and Axes, with To The East the only peek into No Shouts, No Calls. There are a couple of unexpected treats – a delightful cover of Bronski Beat’s Small Town Boy and a smooth take on Bruce Springsteen’s I’m On Fire that is the cherry on the cake.

Electrelane have returned to a music scene almost unrecognisable from the one they were born into. While never setting out to be an explicitly feminist band, they are undoubtedly an inspiration to uncompromising female and male musicians everywhere, laying a trail for the likes of Warpaint and Twin Sister.

Tonight they prove they’re still a force to be reckoned with, an eclectic treat for both brain and feet. Let’s hope they stick around for a while.

Photo by steeedm, shared under a creative commons licence.

Louise Allan is a copywriter and web editor based in London. She loves bikes, books and thundering basslines