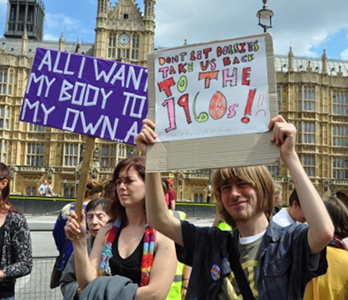 A mystery shopping exercise at crisis pregnancy centres found that pregnant women are subjected to “scaremongering, emotive language and inaccurate information about abortion”, reports The Guardian.

A survey of 10 centres operated by Christian and anti-abortion organisations found evidence in most of them of poor practice and factually incorrect advice, while the quality of counselling differs widely. Advice ranged from scaremongering – linking abortion with breast cancer, for example – to actions apparently designed to steer women away from abortion, such as showing them baby clothes and talking about “the child”.

The survey, carried out by Education for Choice, found some bright spots: two of the 10 centres gave out accurate advice and one recommended abortion providers. But for the most part they found a hodge podge of examples of outright misinformation (about what abortion involves, and wrongly linking it to breast cancer and infertility), and attempts to guilt women. I suggest reading the whole thing here.

Of course, all this is deeply relevant, not just for the women who are targeted by these crisis pregnancy centres, but because anti-choice campaigners are arguing that women seeking a termination must have “independent” advice, and criticising current provision because it “comes from organisations that rely so heavily on charging the NHS for each abortion they carry out and so have a vested financial interest in an abortion going ahead”, as Nadine Dorries’ ‘Right to Know’ campaign claims.

So it’s deeply interesting that this is the sort of ‘advice’ that these centres, which have emerged from campaigns to deny women the right to choose, provide at the moment.