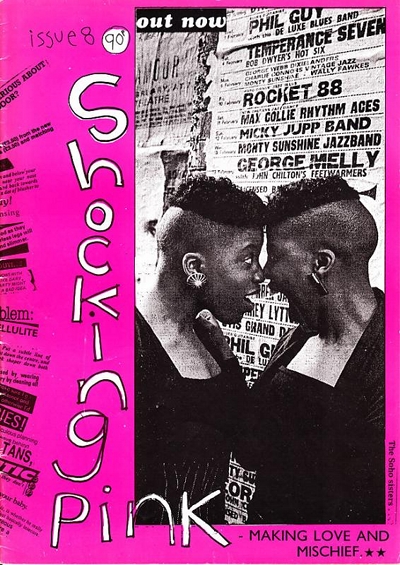 Shocking Pink was a magazine for and by young women, that rejected the adult-oriented feminism of the periodicals of women’s liberation in favour of a youth-led agenda that prefigured riot grrrl. Cazz Blase talks to the women who made it happen

Shocking Pink was a magazine by and for teenagers and young women. Spanning 1979 to 1992, the magazine’s history charts a tumultuous period in British history and politics, not to mention feminism. Not quite a magazine, but not really a fanzine, Shocking Pink occupied a unique position in the post-punk second wave feminist world. It had access to and support from organisations and service that are now extinct and, in a pre-internet world, where sales were done face to face, by mail order, or through left wing bookshops, it was able to fill a distinct niche for a range of disaffected young women as well as gain recognition from the mass media. It was run by three different collectives throughout its long history and, while this is not a comprehensive study and I have only spoken to a small group of women who were involved in the magazine, I do hope to provide you with a behind the scenes history of the magazine throughout its three phases, and to set that history in the wider feminist, historical and political context of the 1980s and early 1990s. I will also be exploring the magazine’s legacy.

Want to read the rest of this feature? Then click here!