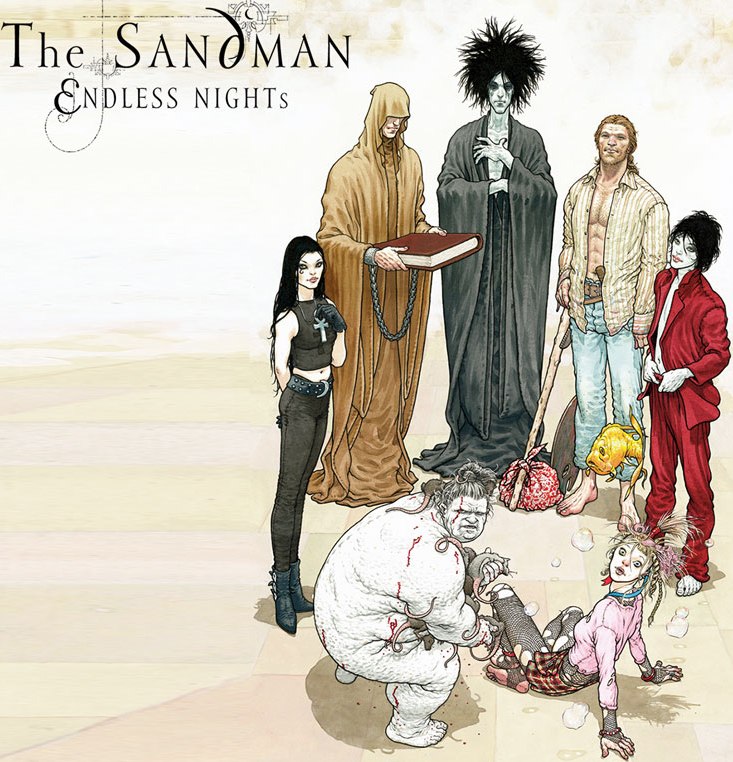 Right now, in Geek Land, it could be argued that no one is more worshipped than Neil Gaiman. His star seems to be on an exponential rise; his multi-award winning novel American Gods has become a modern classic and is soon to be given the magic HBO treatment, his children’s tale The Graveyard Book found its way onto the New York Times’ bestseller list and he penned a pivotal episode of Doctor Who which became an instant fan favourite. His greatest achievement though, as far as this reviewer is concerned, has to be The Sandman published by DC Comics, which ran from 1989-1996, now collected into 10 graphic novels. It too was on the New York Times’ bestseller list – an honour not many graphic novels can claim.

The women of the Endless are not superheroes or journalists, prostitutes or assassins. They are unique, odd and strangely real, like members of a family we can believe exists

Populated by a cast of wild, wonderfully bizarre characters, the series was illustrated by a number different artists, working in a variety of unconventional styles. Featuring gods and demons, talking animals and vortex-containing women, it tells the tale of The Endless, a group of siblings who exist outside time, embodying the central concepts of humanity – Dream, Death, Despair, Desire, Destruction, Destiny and Delirium. The plot of The Sandman is very long and complex, revolving around the story of Morpheus the Dream King, who returns to his realm after seventy years of imprisonment. Through innumerable twists, turns and digressions, Morpheus tries to keep his family together and safe from change, while his sibling Desire plots against him, ultimately causing him to bring about his own downfall. The series is required reading for anyone who has ever worn too much eyeliner, listened to The Cure or quoted a Greek tragedy. It is also extremely illuminating if one is a feminist.

The women of The Endless are a fascinating bunch. Of the seven siblings, three are men and three are women. The seventh sibling is Desire. S/he is genderless and androgynous, with a classic style and a suave demeanour.

The three women are visually very unlike the female characters comic audiences had grown accustomed to. Despair is nude, fat, grey skinned and has a bizarre habit of tearing at her own flesh with a hook. Delirium is a punkish, dishevelled redhead (bearing a resemblance to Gaiman’s BFF, Tori Amos) with mismatched eyes. Death is a raven-haired goth with a slouchy, casual look. These women are not superheroes or journalists, prostitutes or assassins. They are unique, odd and strangely real, like members of a family we can believe exists.

Despair is creepy, existential and very family-oriented. She is a perfect example of Gaiman’s genius for making unsettling characters very human and likeable. In any other comic book, someone like Despair would be a villain, but in the Sandman universe she is actually one of the more benign presences, despite her job of bringing misery and hopelessness to the world.

Delirium is incoherent, whimsical and kind. She was once Delight but lost her mind long, long ago, for reasons never revealed. Her madness is not a thing to fix or flaunt, it is simply part of the fabric of her. She is also extremely funny and in her interactions with Dream, manages to undermine his austerity with silliness.

Death is the most powerful of The Endless and the only one not bound by rules. She has a wise, almost motherly manner, despite her physically youthful appearance, and is witty and playful. By turning the scary, hooded Grim Reaper vision on its head, Gaiman has given us a character that is both very powerful and very feminine.

While the characters are otherworldly and bizarre, they are also more human than most comic book characters – and most Hollywood actors

Meanwhile, Desire would probably be described today as genderqueer, embodying the fluidity and complexity of gender and sexuality in sharp contrast to the traditionally binary gender roles of many superhero comic series.

There are a number of queer characters in The Sandman. In The Doll’s House we have Chantal and Zelda, the freaky lesbian couple in the attic. In A Game of You, a story of identity and challenging traditional roles, we have another lesbian couple, Hazel and Foxglove, as well as Wanda, a trans woman. When Wanda is killed her family choose to bury her as a man. Her best friend Barbie – a very intriguing and unusual human interpretation of the famous doll – amends the name on the headstone with lipstick, and later dreams of Wanda looking beautiful and feminine, happily waving goodbye, accompanied by Death. Gaiman manages to be sensitive and, above all, realistic here while presenting a queer-positive message.

In terms of feminist significance, some of the most interesting plot lines are those involving imprisonment of or violence against women. Dream is a passionate and volatile man; when his lover Nada tries to escape his love, she is sent to Hell as a punishment. We might expect the story to be left at that, but Gaiman wants to show Dream the consequences of his actions. At a family meeting his siblings confront him. Desire, with whom he doesn’t get along, is the first to reproach him and when Death, whom he respects a great deal, agrees, he reluctantly heads to Hell to free Nada. After a half-hearted apology Nada reproaches Morpheus, explaining the ordeal she has suffered at his hands, and strikes him. He now admits that he acted wrongly because she hurt his pride. It is not only Nada’s strength that is noteworthy in this story but also Dream’s vulnerability. This is the first step towards his realisation that he cannot control everything and the story’s eventual resolution.

With the proposed movie adaptation stuck in development hell for over 10 years it seems unlikely that we will see The Sandman brought to a new audience the way that the X Men franchise has been. Perhaps this is due in part to the very ordinary and real nature of certain elements of the series. While the characters are otherworldly and bizarre, they are also more human than most comic book characters – and most Hollywood actors. Newbies can instead look to the new four volume collection of the books, The Absolute Sandman, to encounter both a mirror image and a dream vision of our own complex world.

Francesca Lewis (27) is a Yorkshirewoman, an independent scholar and a crazy person. She has presented papers on Sadeian Feminism and Feminist Catharsis at various gender-focused conferences and writes short fiction featuring morally grey female protagonists. Read her short fiction here.