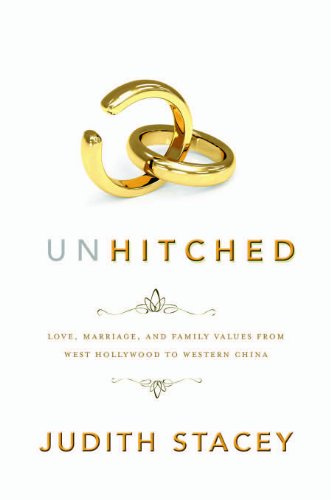 “A democratic state has no business favouring any particular brand of intimacy or family life.” So Judith Stacey argues forcefully in Unhitched, her study of unconventional families from Los Angeles to rural China. Everybody, Stacey shows, is working to find a balance between love and domesticity – that is, between the urge to sleep around and the need for a loving, stable family life. And, perhaps unsurprisingly, a lot of people think the perfect balance is to be found outside of the confines of a traditional nuclear family.

Unhitched provides a lively tour of several more or less polyamorous communities, explaining the benefits and difficulties of these family arrangements and ultimately arguing that society must fundamentally rethink its attitude towards such relationships.

Across the world, governments and conservative pressure groups seek to place rules and boundaries on the relationships people are permitted to enjoy – often claiming scientific grounds for doing so. The well-publicised crusade by the US Christian right against LGBT rights is a perfect example; advocates of ‘traditional marriage’ assert that legally linking one man and one woman has all sorts of benefits for the individuals concerned, their children and for society at large.

In one of the book’s most effective passages, Stacey explains clearly and precisely why they are wrong: dodgy studies are debunked and the idea that a legal contract can truly affect behavior, when such basic human needs are at stake, is effectively scorned. Indeed we are shown that the very concept of Christian groups advocating ‘traditional marriage’ is highly ironic considering the Old Testament’s implicit acceptance of polygamy (this is where one man has many wives – the opposite, polyandry, has been considerably less common throughout history).

The passage on gay people living in Los Angeles is empowering, telling the story of several people who have created from scratch a family structure to suit them

Such work is timely given the contemporary right’s continuing obsession with marriage (such as David Cameron’s attempt to bring in tax breaks for married couples). But the book breaks out of this political comfort zone and gets truly interesting when it adopts the form of an anthropological study. The author describes three distinct cultures: those of gay Los Angeles, the significantly less liberal post-Apartheid South Africa and the Mosuo culture of China. They are compared and contrasted, with the help of several lively interviews and case-studies.

The passage on gay people living in Los Angeles is empowering, telling the story of several people who have created from scratch a family structure to suit them. There are the gay partners who permit each other to go cruising under certain strict conditions; a ‘three-way marriage’, again with strict rules to avoid any partner feeling excluded; and the lesbian-gay crossover couple who share the custody of their children but do not have a romantic relationship. In some cases partners have written down a relationship contract explaining each one’s rights and responsibilities. Lest this sound too much like a marriage contract, Stacey assures us this is good practice because it forces people to think about and communicate their needs, rather than because of the power of the contract. For anyone interested, one such contract is included in the book as an appendix.

The two other cultures are given slightly less attention – Stacey seems stronger holding forth on her own nation. But both studies contribute something fascinating to the book. The section on South Africa is not for the faint-hearted, particularly as some horrific statistics show just how far the country is from reaching the equality of opportunity enshrined in its constitution. “32% of male youths did not consider it rape if a man forces a woman he knows to have sex; and almost as many female youth agreed.” Just as disturbing, “49% [of South Africans] believed women did not have a right to refuse sex with their partners.”

Polygyny is rife (in fact, the right of a man to have multiple wives is enshrined in the constitution and this is one right the courts do take seriously). Such relationships are a tradition in South African culture, and their legality has nothing to do with a liberal attitude to sexuality. In fact, homosexuality is derided as ‘unAfrican’ and is opposed by traditional groups. This has led to a grim irony: US pressure groups which argue against gay marriage in the US, on the basis that it encourages a slippery slope towards polyamory, have joined in alliance with traditional polygynists to fund the fight against gay rights in South Africa.

The last study, of the Mosuo people in China, provides some truly unusual material for reflection. The Mosuo have ‘matrilineal’ system where children live in their mother’s house even into adulthood. The sons are free to pursue sexual relationships with any woman they wish, on the condition that they return to their mother’s house by the morning after, and assist in the raising of their sister’s children. Likewise, the daughters have total freedom to pursue relationships with any man, but must remain in their mother’s home and raise any children with their biological family, not their romantic partner.

Stacey argues that this system has had remarkable effects on the wider society: in what some might see as a controversial argument, she says that by guaranteeing women domestic stability in the case of pregnancy – stability which is unrelated to the father’s position in society – the Mosuo have broken the relationship between domesticity and love. The result is a society with very little cultural or parental interference in private relationships and consequently real sexual freedom. Clearly Stacey believes this example sheds great light on the cultural battles over sexual freedoms that still occur in the West.

But the Mosuo also have problems. They deny the existence of homosexuals and deny their people the freedom to choose their own family lifestyle. Furthermore, their reputation for sexual freedom has made them a top visiting destination for young men in China. There are now over 30 hotels in the area, prostitution has become more common and the Mosuo culture has started to erode when faced with the bright lights and easy money of sex tourism.

Unhitched is a reminder that patterns of sexual and emotional intimacy do have a huge impact on wider society and that the personal is political. Part political commentary, part sociological study, the book’s value lies in the fact that it sheds light on unconventional families, while also explaining their wider political and cultural contexts. The book will appeal to anyone who wants to give their own socially liberal ideas some solid intellectual background – as well as to those who want to understand their own unconventional love-lives in the context of the wider world.

Richard Ganly studies History at UCL. He enjoys travel and amateur drama, and is a member of the environmental pressure group, People and Planet.