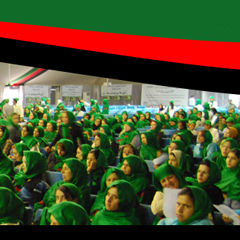 I was fortunate to be able to attend ActionAid’s IWD event in March, when four prominent women’s rights activists from Afghanistan spoke of their experiences and the day-by-day struggles faced by many women in the republic (my review is here). I came away from the session feeling simultaneously very aware of my various privileges and frustrated that there seemed to be little I could do practically to show solidarity with Afghan women.

There are numerous difficulties facing women in Afghanistan, but overwhelmingly the daily struggle for many is simply survival in the face of extreme poverty, domestic violence, discrimination and the lack of education – and just getting through the day often leaves no time for consideration of wider issues. So I was interested to learn of a campaign to be launched on 7 October and running until mid-November as a way to show solidarity with Afghan women. The campaign is organised by several organisations including Oxfam GB, Muslim Women’s Network UK, WISE, Working Muslim, Soroptimists, Women in Black, No Women, No Peace, Safer World for Women, Care and Women for Women International.

The significance of the date, 7 October 2011, is that it marks the 10th anniversary of western intervention in Afghanistan, and women are campaigning and mobilising to make sure that the international community doesn’t forget the promises that it made to Afghan women.

As Lucy Arora of Oxfam GB, who contacted The F-Word with details of the ‘green scarves’ solidarity action and vigils, points out:

This is a key date where people will be taking stock – looking at the impact of intervention over the last 10 years. When “women’s rights” was central to the rhetoric used at the time of invasion we need to use this date to talk about the rights of women in Afghanistan, past, present and future.

In December the international community will meet at Bonn in Germany for a Foreign Minister’s conference where governments will make statements about their expected levels of both aid and military involvement for the next 10 years. This is a key time to make sure that women’s rights are not neglected in the exit strategy.

The Afghan Women’s Network [also on Facebook] is asking the international community to:

And the significance of green scarves? Lucy Arora again:

The women’s movement in Afghanistan has long used green scarves in their campaigning to symbolise their movement – so we in solidarity with the Afghan Women’s Network are calling on people to wear green scarves in solidarity with the women of Afghanistan as part of a photo petition that we will ‘deliver to Foreign Ministers before they attend the Bonn conference. These images will also be made into a solidarity photo wall which will be taken to the Bonn Conference and erected outside the event as a visual reminder of the rhetoric of intervention and a global display of solidarity with Afghan women.

The photo wall will be launched from Channel 16 on 7 October.

Candlelit vigils will take place across the UK on 31st October – the anniversary of UN Security Council resolution 1325, which accepted that conflict has different impacts on women and men and the importance of involving them in peace processes – and anyone who organises or takes part in a candlelit vigil can send pictures to [email protected] (email) or @nowomennopeace (Twitter) or upload them to the Facebook page here.

With the involvement of so many organisations, this looks set to be a high-profile campaign which will not only enable many of us to show solidarity with the women of Afghanistan but also to achieve a practical outcome in making sure that the rights of women in the republic are foregrounded and included at the Bonn conference in December.

[Image adapted from the website of the Afghan Women’s Network]