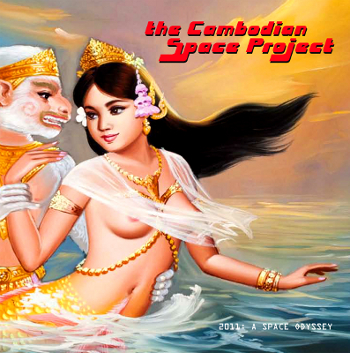 Here’s something you’ve never heard before: psychedelic Khmer psych-rock. Or perhaps you have, if you’ve been lucky enough to while away an evening in a Phnom Penh karaoke bar. Either way, Cambodian Space Project‘s unique melting-pot of sounds should be winging its way to a stereo near you.

Formed on Christmas day 2009 in Phnom Penh, the band has been whipping up a storm in Cambodia over the last two years and has been lauded as the king of Cambodia’s favourite band.

The effervescent, klaxon-voiced Srey Thy fronts the band which is made up of French, Australian and Cambodian musicians.

The band was born when Tasmanian musician and film producer Julien Poulson happened upon Thy belting out Peggy Lee’s Johnny Guitar in a karaoke bar – the evening pastime of choice for Phnom Penn’s youth. Singing has been an escape for Thy in more ways but one. Growing up in one of the poorest areas of Cambodia, Prey Vang, she left home at 18 for the bright lights of Phnom Penn only to be kidnapped by a sex trafficking ring.

Fortunate enough to be rescued by an unknown woman, Thy scraped a life for herself and her family in the big city while indulging her love of singing by night in the city’s bars. She now uses her profile to raise awareness of human trafficking in Cambodia through workshops and talks, and uses her lyrics to comment on her experiences of traditional and modern Cambodian society.

Modern-day Cambodia is strewn with chilling reminders of the Khmer Rouge, a regime that ripped the heart and soul out of the country in the 1970s. Writers, artists and musicians were among the 17,000 dragged to the Killing Fields. CSP’s musical idols Sinn Sisamouth, Ros Sereysothea, Pan Ron and Houy Meas all lost their lives there, and their physical musical legacies were wiped out. Thy’s own mother was forced to abandon her singing ambitions under the Khmer Rouge. CSP are leading the crop of artists that are finally breathing life back into the music scene.

2011: A Space Odyssey is a party album with a difference, welding traditional Khmer instrumentation with gypsy-folk rhythms and rock’n’roll sensibilities. Half of the tracks are covers or tributes to artists from golden age of 60’s Cambodian pop: Ros Sereysothea, Sin Sisamouth and Pan Ron. The album also features a clutch of dizzying, Thy-penned psychedelic Khmer rock songs. 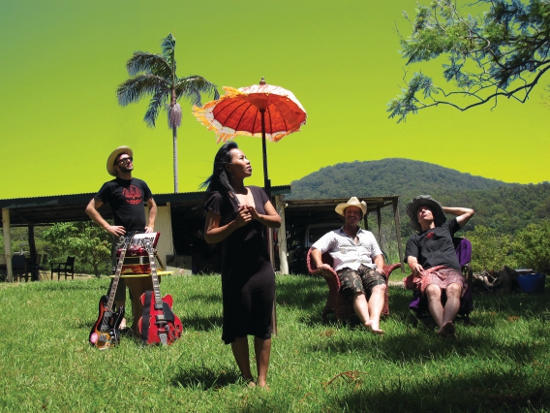 The sounds on the album are as jumbled as the band’s story. Rough and bluesy, it’s all dreamy accordians, trippy vocals and jangling guitars. Love Like Honey gets the proceedings off to a bouncy, hypnotic start, before the squalling trad-rock guitars of Wait 10 Months More reminds us of the sometimes jarring clash of influences that make up the band’s sound. I’ve Found My Love slows the pace to a funk while Have Visa, Have No Rice could be a very drunk Irish jig. Kangaroo Boy is a perky singalong, while Love God, a Khmer/Shocking Blue mash-up, winds things up with a triple dose of sugar.

CSP are clearly a highly adaptable band, accustomed to playing tiny villages, boats on the Mekong and now international rock festivals. On stage, you’d never guess the life Thy has lived. A beautiful, engulfing presence, she draws every eye and ear in the room and puts the rest of her band in the shadows.

2011: A Space Odyssey is an intriguing debut; there’s certainly no one around like Cambodian Space Project.

Second picture provided by Metal Postcard Records. This shows the four members of the Cambodian Space Project in a field in front of a small open building with a palm tree and orange parasol/umbrella in the roof and an artificially lime/olive green tinged sky. Branches of a tree can be seen in the top right-hand corner and three out of four of the band members are looking up into the sky. The band member to the left has a keyboard and two guitars in front of him.

Louise Allan is a copywriter and web editor based in London. Louise loves Cambodia but karaoke gives her the fear