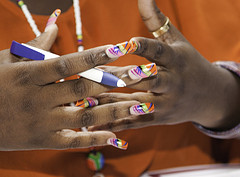 A statement has just been released calling on the British Government to rethink its approach to cutting aid as a way to promote human rights.

The full statement is available online here. There are about 50 organizational signatories and many more individuals, including ActionAid Liberia, Women Working with Women (Kenya), Fahamu (Regional), Coalition Against Homophobia in Ghana, Engender (South Africa), and House of Rainbow Fellowship (Nigeria).

We, the undersigned African social justice activists, working to advance societies that affirm peoples’ differences, choice and agency throughout Africa, express the following concerns about the use of aid conditionality as an incentive for increasing the protection of the rights of LGBTI people on the continent.

It was widely reported, earlier this month, that the British Government has threatened to cut aid to governments of “”countries that persecute homosexuals” unless they stop punishing people in same-sex relationships. These threats follow similar decisions that have been taken by a number of other donor countries against countries such as Uganda and Malawi. While the intention may well be to protect the rights of LGBTI people on the continent, the decision to cut aid disregards the role of the LGBTI and broader social justice movement on the continent and creates the real risk of a serious backlash against LGBTI people.

A vibrant social justice movement within African civil society is working to ensure the visibility of – and enjoyment of rights by – LGBTI people. This movement is made up of people from all walks of life, both identifying and non-identifying as part of the LGBTI community. It has been working through a number of strategies to entrench LGBTI issues into broader civil society issues, to shift the same-sex sexuality discourse from the morality debate to a human rights debate, and to build relationships with governments for greater protection of LGBTI people. These objectives cannot be met when donor countries threaten to withhold aid.

The imposition of donor sanctions may be one way of seeking to improve the human rights situation in a country but does not, in and of itself, result in the improved protection of the rights of LGBTI people. Donor sanctions are by their nature coercive and reinforce the disproportionate power dynamics between donor countries and recipients. They are often based on assumptions about African sexualities and the needs of African LGBTI people. They disregard the agency of African civil society movements and political leadership. They also tend, as has been evidenced in Malawi, to exacerbate the environment of intolerance in which political leadership scapegoat LGBTI people for donor sanctions in an attempt to retain and reinforce national state sovereignty.

Further, the sanctions sustain the divide between the LGBTI and the broader civil society movement. In a context of general human rights violations, where women are almost as vulnerable as LGBTI people, or where health and food security are not guaranteed for anyone, singling out LGBTI issues emphasizes the idea that LGBTI rights are special rights and hierarchically more important than other rights. It also supports the commonly held notion that homosexuality is ‘unAfrican’ and a western-sponsored ‘idea’ and that countries like the UK will only act when ‘their interests’ have been threatened.

An effective response to the violations of the rights of LBGTI people has to be more nuanced than the mere imposition of donor sanctions. The history of colonialism and sexuality cannot be overlooked when seeking solutions to this issue. The colonial legacy of the British Empire in the form of laws that criminalize same-sex sex continues to serve as the legal foundation for the persecution of LGBTI people throughout the Commonwealth. In seeking solutions to the multi-faceted violations facing LGBTI people across Africa, old approaches and ways of engaging our continent have to be stopped. New ways of engaging that have the protection of human rights at their core have to recognize the importance of consulting the affected.

To adequately address the human rights of LGBTI people in Africa, the undersigned social justice activists call on the British government to:

Image of a Black person’s hands with brightly coloured nails, holding a pen by eduinternational, shared under a creative commons license