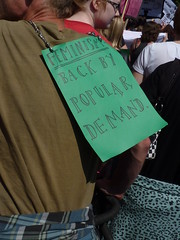 We can’t always blog about the stories in the news that catch our collective eyes, so here is this week’s open thread for discussion and our regular round-up of those we missed. They are links and blog posts that we found interesting, thought-provoking or newsworthy, rather than necessarily things we agree with.

And here’s a video of Sunday’s Block the Bridge, Block the Bill protest (for more information see Keep our NHS Public and UKUncut. (The cross-stitched/embroidered placard is awesome):

[Image at top of post is of a sign on someone’s back, saying ‘Feminism: Back by popular demand’. Photo is by me.]