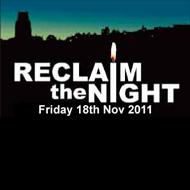 On Friday 18th November, hundreds will take to the streets of Bristol to demand the right to walk through the city, free from the fear of sexual harassment, abuse and violence. Not only this, but they will be marching to call for an end to all sexual violence, whether committed on the street, in the workplace, in schools and in the home.

“In 2011, we still live in a rape culture. This means that we live in a world where rape myths that seek to blame women for the violence committed against them are widely believed. It means that women are held responsible for preventing rape and preventing violence, by being instructed to modify their own behaviour to ‘avoid’ rape. But rape is not a natural hazard that women can ‘carefully avoid’. It is a deliberate, vicious and violent crime.

When there are attacks on women that make the news, the response remains the same. Stay indoors, don’t drink, use the buddy system. Posters all over the country warn women about the dangers of rape by telling them to restrict their freedoms. ‘Let your hair down, not your guard’, we’re told. The fact that rapists, not victims, are responsible for rape remains unspoken.

Every month in Bristol 130 women will be raped. And yet the conviction rate from reporting to trial stays pitifully low, at 6.5%. Women who are brave enough to report rape find that it is they, not the rapist, who is put on trial. Reclaim the Night demands an end to this injustice.”

The aims of Reclaim the Night are to:

One25 fully supports the aims of Reclaim the Night and are proud to be participating in the event again this year. We too believe that everyone deserves to be safe from violence on our streets and that everyone deserves the same high level of support if they are attacked, regardless of their personal background. It is of vital importance that the Bristol community get together this November to raise awareness of the plight of those who live in daily fear of our streets at night and campaign for safer streets for all of us.

Where? Meet in College Green for a vigil to remember the victims of violence, before marching through the city to Portland Square, for speakers and rally.

Who can march? We welcome people of all genders and ages, but the march will be led by a woman-only section (for all self identifying women).

ETA, 15 November: An after party is being organised, see Facebook for full details.