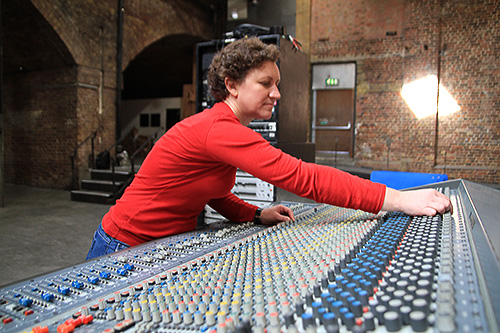 Ruth Rosselson interviews Darryn De La Soul, whose achievements include mixing the sound at the 50th anniversary of the Jodrell Bank observatory, work with Faster than Sound and teaching the live sound diploma for Alchemea

In 25 years of (extensive) gig going, I don’t personally remember ever seeing a female sound engineer. I decided to talk to Darryn De La Soul, a sound engineer from London who also happens to be a woman, to find out why and to learn more about this side of the music industry.

“To be honest, I don’t think I have ever come across any prejudice against me,” says Darryn. I had expected to hear stories of sexism but Darryn says that, in over ten years of working as a sound engineer, her experience has been pretty good. “I’ve not personally experienced any obstacles and in fact I’ve always been welcomed” she says. “People are always really positive, saying it’s great to have a woman do this. Bands especially love to see girls behind the desks.” But if her experience has been so positive, why aren’t there more women?