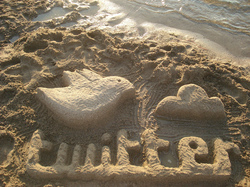 Twitter is a great place to meet like-minded people, so when, a few weeks ago, two different people asked me to help them find other feminists in their local area, I started having ideas. From The F-Word twitter account I began collating lists of where different feminists who came forward lived. 36 hours of copying and pasting later, the Find Feminists in your Local Area on Twitter list was complete. I was sad to close it, but it was an unmanageable task to maintain indefinitely. It will remain a first point of reference for twitter feminists to find people close to them, and I know of at least one tweet-up being planned as a result of it.

A few days later, Zoe Margolis asked for recommendations of female comedians that she should be following on twitter, or seeing in real life. The power of the hive mind did its magic, and this list resulted.

Basking in the success of the feminists by location list, @vicky_brewster happened to mention that it would be amazing to have a similar list, but one which united feminists by mutual interest. I agreed, but said it was an impossibility. How on earth could such a mission ever be accomplished? But the idea stayed with me, and I found myself wondering if it was somehow possible. After asking for topic suggestions from our twitter followers 4 times, and with a bit of testing, the Find Feminists on Twitter Based on Shared Interests project began to take shape.

It was important that, unlike the location list, this one wouldn’t require me to manually add each person. This way, it wouldn’t need to be time limited, and could be open indefinitely without creating a ridiculous amount of work for myself. So, the hard work all happened in the preparation and instigation, and now anyone can add themselves, listing their twitter name under one or more of 144 (count ’em!) interests, and there is a final option for people to add anything I have missed.

I launched it yesterday evening, and in the first 3 hours, 150 feminists added themselves and found new people to follow. At the time of writing this, 238 people have filled out the form. So, if you are a feminist on twitter and want to find others who share your interest in everything from abortion rights to zines, fill out this form. I’ve been told it is very easy to fill out on a mobile phone, as well as a computer. Once you have done that, have a look at the resulting document to find other people.

This is already becoming an incredible resource for feminist networking, and it’s just the beginning. Over time, the information can grow and grow.

[The image is a photograph of a sand sculpture of the word twitter and the twitter logo. It really is much more impressive than the words I am using make it sound. It was taken by Rosaura Ochoa and is used under a Creative Commons Licence]