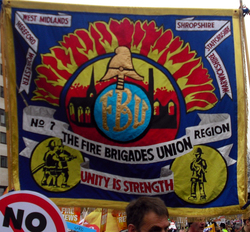 The Fire Brigades Union have issued a press release about a lobby of MPs which will take place tomorrow, Wednesday 9th November, over pension reforms.

Women firefighters make up less than 4% of the workforce, and the Union point out that the government’s decision to scrap equality and diversity targets will make it even more difficult to recruit and retain women firefighters. They argue that we need a more diverse Fire and Rescue Service that resembles the communities we live in.

Around 20 uniformed women firefighters from across the UK will carry out a targeted lobby of key MPs on Wednesday 9 November.

The women say the changes will mean women may have to work even longer than men in order to secure a full pension. And they say no proper assessment was made of how the changes would specifically impact on women.

The Government plans to increase pension contributions rates to at least 14.2% by 2015 and up to 17% for those who have secured promotion to officer roles. That will mean extra contributions of between £2,000 and £7,000 for those three years.

In addition the Government plans to increase the retirement age from 55 to 60 for those in the Firefighters Pensions Scheme. There is no evidence that working to 60 is possible for any firefighter in a frontline role and if women have to work beyond 60 to gain their full pension entitlement then this will be increasingly more difficult. Women firefighters are fearful they may get dismissed from the fire service due to capability of carrying out their role.

Women in the fire service are much more likely to be in the Local Government Pensions Scheme where the retirement age will move up to 66 and then on to 68. That is the pension scheme for those who work in fire service command and control centres, the vast majority of whom are women.

Denise Christie, who represents women on the Fire Brigades Union National Executive said: “Women take time out for pregnancy and maternity leave. The majority of women cannot afford to pay their pension contributions when their full pay is stopped and they only have the basic statutory maternity pay (SMP) to live on.

“To receive their full pension entitlement women need to pay back the pension contributions they missed during maternity leave. This will be even more difficult with the higher contribution rates.

“The knock on effect will mean women will need to work longer than 60 to gain their full pension entitlement if the pension age goes up. That is going to be very difficult. The public do not need an aging fire service.”

“The Government was required to carry out an assessment of how its plans would impact on women – an Equalities Impact Assessment – and it has never done so. They have plucked a retirement age number out of the air with no regard as to whether anyone, let alone women, can work to the ages they are demanding.

“Women are not just being ignored by this Government they are being attacked. Out of the billions of pounds that this Government is saving, the majority is coming directly from women. It’s mostly women who work and rely on public services. The Governments attacks on public servants, including firefighters, are clear to see with the current job losses, pay cuts and detrimental pension reforms. Making women bear the brunt of deficit cutting measures makes a mockery of the government’s claimed commitment to fairness.”

[The image a photograph of a banner at a demonstration, of the No 7 Fire Brigade Union, with images of firefighters and the phrase “Unity is Strength”. In the bottom right of the corner is a cut-off placard reading “No cuts”. It is adapted from the original photograph by Simon Murphy and is used under a Creative Commons Licence]