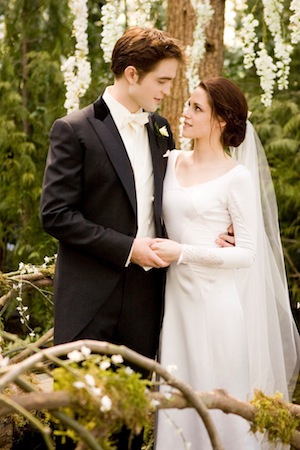 At pains to defend the latest chaotic and confused installment of The Twilight Saga, Mathilda Gregory reads it as a transgressive anti-fairytale about perils of femininity

Twilight: Breaking Dawn (Part I) opens with shoes. Well, it actually opens with hot-werewolf Jacob (Taylor Lautner), who realises he’s been on screen for three seconds with his shirt on, so takes his shirt off and runs into a wood. Then we move on to the shoes, as Bella (Kristen Stewart), rehearsing for her wedding, tries to learn to walk in a ridiculous pair of heels that are cartoonishly high and far higher than anything anyone would really wear to a wedding. And so it begins, this complicated mess of a film, which seems to be attempting to answer everything you ever wanted to know about femininity, but were utterly terrified to ask.

It’s now chapter four of Gothic romance juggernaut Twilight and its protagonist, Bella, is growing up. She’s a woman now, and this film is concerned with her attempts to perform femininity. So we get a sequence where Bella – who up until this point had barely removed her hoodie onscreen – fumbles her way through the shaving off bits of body hair and considers wedding night lingerie. It’s as if, after so long a staring at sparkly vampire Edward (Robert Pattinson), Bella’s body is finally up for grabs.