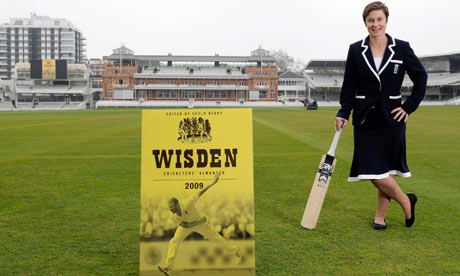 Sportswomen of the Year 2011: Claire Taylor

As we announced last week, after the BBC announced a female-free shortlist for Sports Personality of the Year, throughout December we will be running a series of features and guest blogs celebrating the achievements of sportswomen from the UK.

This guest blog is by Paul Frame.

She signed off with a useful 30 that resulted in an England win once again over Australia.

No career can ever be summed up entirely through statistics, but Taylor’s are without a doubt very substantial indeed. In 126 one-day internationals (ODIs) Taylor scored 4101 runs at an average of 40.20 amassing a haul of eight hundreds. In 15 Tests Taylor made 1030 runs at an average of 41, impressively making 4 centuries in just 27 innings.

Of themselves those statistics would warrant a blog following Taylor’s retirement. However, not many English cricketers have won not just one World Cup, but two. In fact, up until May 2010, the only three previous World Cup wins by English sides were all won by English cricketers with two X chromosomes, rather than their higher-paid, better resourced counterparts from the men’s side.

So Claire Taylor is really special, part of a group of cricketers that in six months won the Ashes in Australia, the 50-over World Cup and the Twenty20 World Cup.

Let’s put that in context. This winter Andrew Strauss’s side won the Ashes (albeit in a longer series) but could not rise to the challenge of winning their first ODI World Cup and limped out at the quarter- finals stages.

Taylor holds any number of records for an England player; the highest number of ODI centuries (8), and her four Test centuries puts her second on the all-time list for England. Perhaps the single stand-out statistical achievement is to have scored nearly two-thirds of the runs (156) in one ODI innings at Lord’s than Sachin Tendulkar has (240) in 12 Test and ODI innings at HQ. That’s right: Sachin Tendulkar at Lord’s is nowhere near as good as Claire Taylor (if saying that Tendulkar isn’t as good a batsman as an English woman doesn’t get you untold web hits nothing will).

She brought a professionalism to her game and the team that saw them go on an unprecedented and domineering run of form that saw them acknowledged as being the best in the world in all forms of the game.

Scyld Berry, when editor of Wisden, thought her good enough to warrant a place in the cricketing pantheon as one of Wisden’s five cricketers of the year in its 2009 edition. The selection is often a personal one, but it reflects just how well regarded a player she was, especially when one thinks back to early 2009 and remembers just what a shambles the other ECB first XI were in. England had lost 3 Test series in a row and were a mess after a bitter winter that had seen the coach and captain sacked by England. Little wonder. then, that Claire Taylor was chosen, her England side had seen them rise to the top of the world; arguably the men have been trailing in her and the rest of the England womens team’s wake.

So a batsman averaging 40 in Tests and ODIs has retired. It’s a testament to her, though, that there is a pool of players wanting to prove themselves as worthy of replacing her. That’s not a bad legacy to leave English cricket with.