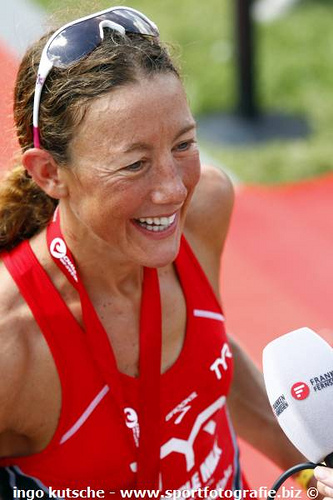 Sportswomen of the Year 2011: triathlon

Here are a few more thoughts for regarding the recent “mishap” with the final 10 SPOTY list. I am a male triathlete and follow many of the male and female stars of the sport on Twitter and Facebook and there has been outrage, which in my opinion is completely justified. The likes of Chrissie Wellington (pictured – image from her website) have really spoken out and the message about positive female role models has been a main topic along with the editors/press that were selected to pull short lists together. Chrissie is a very proud athlete and has decided to boycott the SPOTY event on the 22nd December.

There has been even more debate through the social networks and newspapers and Clare Balding has been doing some great promotion of female sporting stars through Twitter. Some of the sportswomen named below and others have now posted some well written blog entries. A further debate kicked off along similar lines last week following a piece by Daily Mail journalist Liz Jones, which got the expected response from the female and male masses.

So back to the lack of females on the SPOTY list:- :-

1. Is it time the word “personality” was removed from the list as there are clearly sportsmen on that list without any? Is it about achievement, recognition or popularity, who knows? One paper had Patrick Vieira in their list: now that really did amaze me.

2. I think it is going to be a long time before women’s team sports are going to be well broadcast, which is always going to be a problem with recognition, but there are such a massive number of individual females out there doing a lot for sport in big events matching the men, this can’t really be a justifiable reason. The numerous female triathlete world champs, the swimmers, the track and field stars, the cyclists that are in the media surely supports this. Would I rather see the female cast of TOWIE on a magazine front cover or the likes of Jess Ennis, Helen Jenkins, Keri-Anne Payne, Lizzie Armistead etc telling their stories of success and determination? I don’t need to answer that one, do I? Commitment, dedication and competition face us all in everything we humans do and these are the female (and male) role models that should be promoted.

3. Is the way forward to have a male and female SPOTY – the King and Queen of Sport? When SPOTY started there was probably much less female participation in sport, but things have changed, should SPOTY now change as well?

4. If the magazines and papers that selected these lists were real sports fans then they would have a greater appreciation of the work and dedication that all athletes put into their sport and I am sure the list would be more balanced. Hollie Avil (British triathlete) mentioned that if the selection was going to include the likes of NUTS and ZOO, then where was the ‘Cosmo’ or ‘Glamour’ representation – and of course how many of the journos or editors were actually female?

5. Many have said that this is only the BBC, there are many other awards out there that women have won or can win, but how many “Joe Public” know of those “other” awards? SPOTY is accessible to all and right in most people’s faces. The BBC platform needs to support positive role models in both female and male sports personalities.

6. Why not have a long list that the public can vote for from day one – easily done online? If FHM can put together a list of 100 women for men to vote on then how hard can that be?

I have a funny feeling next year may change after the Olympics: let’s hope there is equal representation like the YSPOTY. For this year, my choice would probably be Chrissie Wellington for the list (if I had one choice). I may be a bit biased, but I understand the dedication she has to the sport and she also does a lot of charity and grass roots stuff. She is actually pushing the men harder and harder and the times are getting closer!

SPOTY should be used to celebrate success in minority sports as well, and less about those that earn six- figure weekly salaries for their trouble! From a “which males should have been on the list” perspective, Alistair Brownlee destroyed nearly every field of every triathlon he did this year, he is educated, well grounded and a double World Champion (and shares a flat in Leeds with his brother!!)

There is no debating many of the SPOTY male nominees have earned their place on the list, but like everything it does need to be balanced.