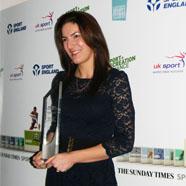 Sportswomen of the Year 2011: the best thing to happen this year?

This guest blog is by Tim Woodhouse, head of policy at the Women’s Sport and Fitness Foundation

Although it didn’t feel like it at the time, the announcement of the all-male BBC Sports Personality of the Year short list may just turn out to be a blessing in disguise.

The outcry from the public, leading sportswomen and journalists has meant there has been a media spotlight on women’s sport, which just wouldn’t have been the same if one or two women had scraped in the list. Women’s sport has been everywhere, from the predictable (Women’s Hour and every national newspaper) to the very unpredictable (Private Eye and BBC Question Time).

So hopefully more people will now be aware of our female world champions from this year (the likes of Rebecca Adlington, Keri-Anne Payne, Chrissie Wellington, Helen Jenkins and Sarah Stevenson). And hopefully the BBC will go out of their way (without being patronising) to ensure that the rest of the Sports Personality of the Year Show properly reflects the amazing achievements of women’s sport this year.

The public outcry came as no surprise to us. Sports fans we surveyed – most of whom are male – think women’s sport is better than it ever has been, is a high quality product and 61% told us they want to see more of it on TV.

So how did the BBC come to find itself in this position? The short answer is that they have a flawed nomination process. Relying on the opinions of 27 men is never the best way to ensure a representative outcome, no matter that they happen to all be sports editors. The fact that two of them represent Nuts and Zoo magazines (whose interest in women has very little to do with their sporting talent) just further hinders the process.

So we at WSFF formally asked the BBC to change their nomination process, and to their credit they have agreed to do so for next year.

However the flawed nomination process is just symptomatic of much wider and deeper problems within sport. Overwhelmingly male, it is dominated by male sports and male team sports in particular. The majority of people working in British sport are decent individuals who love watching our top sportswomen succeed. But there remains a vintage sexism that means that women’s sport is often seen as second class. Examples of explicit discrimination, such as Andy Gray and Richard Keys’s comments about Sian Massey, are quickly rebuked and rightly vilified. However there are ingrained practices and organisational assumptions which have profound implications for the development and growth of women’s sport.

Why, for instance, does women’s sport get less than 5% of the total sports media coverage? Why are all 27 sports editors on the BBC SPOTY nomination panel male? Why are only 20% of Board positions of the governing bodies of sport held by women? Why do international federations of boxing and badminton think it’s appropriate to force women to wear short skirts to make them more appealing? Why do marketing agents of sports women believe the only way to get media coverage is by taking their client’s kit off? Why does the latest report from our Commission on the Future of Women’s Sport reveal that women’s sport accounts for just 0.5% of the entire sports sponsorship market?

So to answer the question I started with – is this the best thing to happen in women’s sport all year? The answer is (thankfully) of course not. WSFF are the charity partners of the Sunday Times Sports Woman of the Year Awards and at the Awards last week we celebrated some amazing achievements. In addition to the individual World Championship wins mentioned above, 2011 has also seen England Netball win the World Series, Europe’s Solheim Cup team secure an incredible comeback win over the USA, the England Rugby team claim an impressive series win over world champions New Zealand and Hope Powell’s England football team reach the quarter final of the World Cup before narrowly losing to France on penalties.

2012 will prove even bigger with almost certain success at the Olympic and Paralympic Games. As a sector however, sport still needs to do a lot of work on its underlying problems to ensure that we can fully unleash the potential of women’s sport.