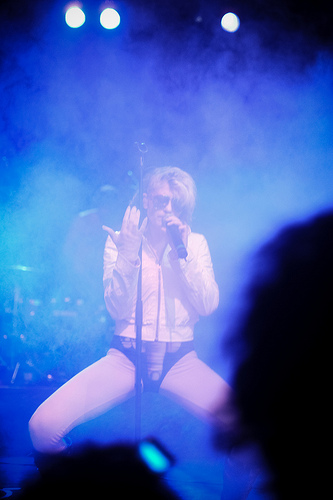 It’s time for my final post here. It’s been a good month, in which I got to talk about things I’m passionate about but don’t usually discuss on my blog. Having discussed Doctor Who, sex and anarchism, I feel like I’ve managed to give people a good idea of what I’m like and what’s important to me.

I thought I’d finish this month’s guest spot with a final music post, to go with the other two. In this, I’ll talk about five other female punk bands that have influenced me or opened new doors to me but, for whatever reason, wouldn’t fit in the other posts.

The first of these is Le Tigre. Formed by Kathleen Hanna of Bikini Kill, Le Tigre have a much more electro-poppy sound, but still manage to tackle the same feminist and LGBT issues. With infectious catchiness, they brought riot grrrl into a new century, alongside other bands such as Chicks on Speed. Perhaps their best known single (and definitely my favourite) is Deceptacon:

The Butchies are a band I discovered through Le Tigre (their lead singer, Kaia Wilson, released LT’s first album). Formed by former members of Team Dresch and Born Against, this queercore band released four albums before sadly going on hiatus in 2005. Combining light guitar riffs with explorations of sexuality and gender identity, The Butchies are a really easy band to love:

Bratmobile were part of the original riot grrrl scene of the early 90s, playing with Bikini Kill. After doing a reunion tour with Sleater-Kinney in 1999, and releasing two more albums, the band called it a day in 2004. The band have a minimalist, Ramones-esque quality to their music, which combines easily with elements of surf-rock to give their songs a wonderfully catchy, upbeat quality, as illustrated by the fabulous Gimme Brains:

Another highly recommended band are Lunachicks, a New York band who were active between 1987 and 2000. With fast-paced, hardcore songs about getting drunk and having a good time, you can’t help but smile when you hear them:

Finally (and possibly most importantly) on the list is Peaches. Born Merrill Beth Nisker, Peaches is a Canadian solo musician best known for her sexually-explicit, gender-bending electro-rock. (If those three hyphenated terms appearing together don’t get you excited, we can’t be friends. Sorry.) While her lyrics may be too extreme for some (Some people say I keep my self-respect/hidden in my cervix), I’ve always admired her promotion of female sexuality and her “don’t give a shit” attitude, brilliantly displayed by one of her earlier songs, Fuck The Pain Away:

I think we’re really lucky to live in a time where music (whatever our tastes may be) is so widely available. Whether you’re listening to bigger bands on Youtube, Last FM and Spotify or checking out some up-and-coming kids on Soundcloud, Bandcamp or Myspace, there’s never been a better time to discover new things.

And with that, I declare this guest-blog closed! It’s been a lot of fun, and I’m extremely grateful for the opportunity to do it, and especially to Laura, who mentored me, edited my posts and moderated comments. Thanks everyone.

Photo of Peaches by Kmeron, shared under a Creative Commons Licence.