The brilliant and the eclectic: Gaggle preview their forthcoming debut album

I had never been to Hackney New Empowering Church before and, to be honest, I was expecting a church with wooden pews all lined up. But when I found the building, it was the complete opposite of a church. It wasn’t the most obvious place to find. Indeed, I must have walked past it several times before I spotted a building, which appeared to be some sort of community hall with peeling lettering on the wall that looked like it might have said ‘Hackney New Empowering Church’ if the letters hadn’t peeled off. Luckily, another person who was there for the gig overheard me and pointed out that I was in the right place and the entrance was hidden around the side of the building.

Once I got inside, there was random graffiti on the walls, sofas lined up on one side of the room, a makeshift bar and plastic palm tree lights The stage was in another corner of the room. This was unlike any church I had ever seen. It was already living up to the ‘tropical voodoo Christmas party’ that Gaggle had been promising on their Facebook page. There were also a couple of skulls hanging off the ceiling.

The evening started off with some music from DJs from Kerrang and Rock Feedback. A good warm up for the evening, with plenty of inspiring female fronted music ranging from Chicks on Speed and PJ Harvey to the poppier side of the spectrum with Abba and Destiny’s Child.

The support act were Woman’s Hour, who had recently released their debut seven inch single ‘Jenni/Human‘. This four piece female fronted band from Kendall seemed to blend a multitude of styles together, from Portishead-esque electro to experimental and their set also included a version of the David Bowie classic ‘Heroes’. 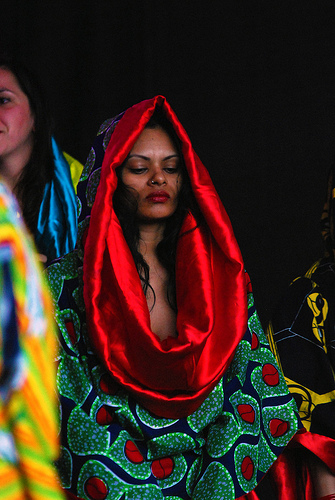 After some more music from the DJs, women I had spotted throughout the evening dotted around the audience in their cloaks and tribal headgear and started heading towards the stage. Of course, these women were Gaggle. They looked amazingly dramatic as they lined up on the stage, one by one. They had a drummer and a beatboxer, called MaJiker, as accompaniment; with both hidden at the back of the somewhat small stage.

We got to appreciate every one of the women’s vocal talents because, after a few songs, they swapped places around on the stage and every woman in the choir had their moment in the spotlight as they were led by their founder Deborah Coughlin (who I have had the pleasure of catching as a vocalist in the past with her band 586 when they supported the Soho Dolls in my home town of Southend).

The set was fairly short at only eight songs but it was enough to be left seriously excited about their début album coming out early next year. The songs varied from slow and dramatic to more fast-paced, with Gaggle synchronizing their movements to each number. I particularly liked ‘Liar’ with its chorus “How can I tell if my boyfriend’s a liar?” Not only was the way they performed completely different to a traditional choir, but the lyrical content was also more about subjects women can relate to- like relationships and music.

The fact Gaggle combine their work with stunning stage costumes that show very little flesh, meaning you can’t make a judgement on how their bodies look, is a great idea

Gaggle finished the set with a “Christmas Surprise” which turned out to be a rather original cover of Mariah Carey’s ‘All I Want for Christmas is You’. It all seemed to be over far too quickly and I was a little disappointed not to hear their single ‘I Hear Flies’, but I was left very impressed nonetheless. 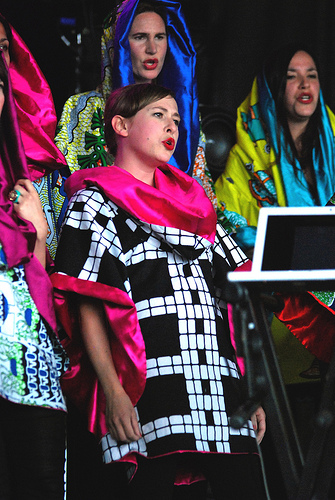 Gaggle are doing something completely new and refreshing. They combine their work with stunning stage costumes that show very little flesh, meaning you can’t make a judgement on how their bodies look, which is also a great idea. The choir have openly feminist ideas and concepts integrated into their performances; they recently did their own adaptation of the opera ‘The Brilliant and the Dark’ which is about the history of women through the ages up to the Second World War.

The music the group create is almost like a completely new genre, as I can’t think of any other material that is anything like theirs. It appeals to a wide range of people because of its mixed style influences. Such a rich set of qualities is bound to be the case with a group of women as large as this one (34 members in total).

When you see Gaggle live, there is a sense that they really want you to focus on their music. And so you should because each and every one of these women has an amazing voice and talent that deserves to be noticed.

Were you at the gig? What do you make of Gaggle’s unique take on choir music?

Pictures of Gaggle in brightly coloured hooded capes (during an earlier performance) by Nathan Dainty, shared under a creative commons licence

Hayley Foster da Silva is a feminist and vegan activist, as well as a writer and all round music obessive with her own radio show featuring only female fronted bands- you can catch her here