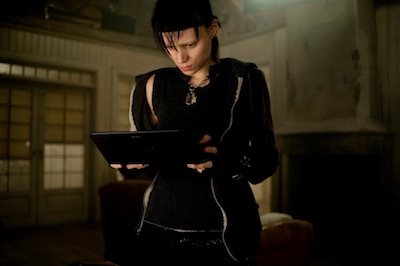 New review: The Girl with the Dragon Tattoo (2011)

Lisbeth Salander is back, with a vengeance.

While some of you might be asking: “Lisbeth who??”, the others have been familiar with her since 2008, when the first volume of Stieg Larsson’s Millennium trilogy, The Girl with the Dragon Tattoo, was published in the UK.

Back in 2009, Melanie Newman reviewed the book for us and Jess McCabe wondered about the politics of drastically changing the title of the novel for the English edition (from, translated literally from Swedish, “Men who hate women”, to The Girl with the Dragon Tattoo).

Since then, various internet feminist spaces have been rife with debate along the lines of: “Does Lisbeth Salander deserve the name of a ‘feminist heroine’ or is she just a patriarchal construct, the result of one white heterosexual man’s misogynistic, sexually titillating fantasies?”

Our new reviewer (although seasoned guest blogger) Chrissy D joins the fray by looking at the latest portrayal of bisexual hacker girl, played by Rooney Mara. As Chrissy chooses to focus only on this particular incarnation of Lisbeth, you don’t need thorough prior knowledge of the character. She asks in her review:

So why is Lisbeth Salander globally regarded as a feminist in the opinion of critics and reviewers? In analysing her levels of kicking ass, it’s helpful to start by considering whether a feminist hero must – as is suggested by the movie’s worldwide reception – be kick-ass to be considered feminist. And, more importantly, does an on-screen feminist have to suffer a traumatic experience in order to ‘deserve’ the label?

The Girl with the Dragon Tattoo is out now nationwide.