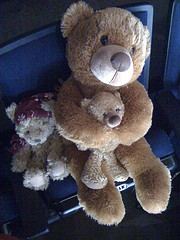 Lords refuse to make single parents pay for use of CSA

The House of Lords last night voted against the government’s plans to charge single parents a fee to use the Child Support Agency to collect maintenance payments from absent partners. Like many of the coalition’s reforms, this would hit women hardest, as women make up almost 90% of single parents.

According to the Guardian:

Cross-bencher Lady Butler-Sloss, a former family barrister and judge, said there were fathers “who would simply not pay”. She told peers: “The idea that a mother in very poor circumstances, where the father has left her with young children, who finds herself having to seek social benefit from the state which she may not have sought before … she then has to pay a fee for the welfare of her children, where she may not have any money and he may have some, it is profoundly unfair.”

The government has promised to try and overturn the ruling in the Commons, presumably because single mothers and their children are to blame for all our ills and therefore deserve to have their lives made as difficult and as miserable as possible.

Photo by scazon, chared under a Creative Commons licence.