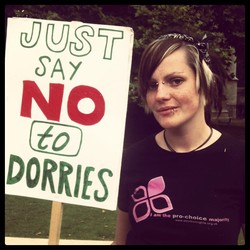 This is a guest post by Beth Granter. Beth works as a social media consultant and data analyst. She is interested in socialism, feminism, queer theory, gender politics, data, art, animal welfare, sexology and biology. Her website is bethgranter.com she is on twitter @bethgranter.

In May 2010 I read about Tory MP Nadine Dorries’ attack on sex education via a private member’s bill. She was proposing that girls (yes, just the girls) be given “information and advice on the benefits of abstinence from sexual activity” as part of their sex education. Let’s quickly outline the glaring problems with this proposal:

The more I read about Dorries, the more I learnt about her multiple attacks on womens’ rights, such as trying to make counselling for women seeking abortion compulsory (we apparently can’t be trusted to decide for ourselves), and provided by religious anti-choice organisations, and trying repeatedly to reduce the time limit on abortions. A few days later Dorries claimed that if more children were taught to ‘just say no’ there would be less sexual abuse. Seriously, she said that, on TV. This blatant victim blaming got my blood boiling.

It is clear to me that Dorries’ attacks are founded on her capitalist, Christian, ideology. She has a misguided idea that comprehensive sex and relationships education leads to unplanned pregnancy which leads to either abortion (against her religious beliefs) or single, working class mothers on benefits (against her political beliefs). None of this is true, and if Dorries really wanted to help women she would be pushing for statutory, fact based, comprehensive sex and relationships education, in all schools, irrelevant of their status as state schools, private schools, religous schools or academies.

Not finding any focused campaign against her newest attack, I decided to set up a Facebook campaign: Stop Dorries’ abstinence for girls sex education bill. After a bit of tweeting, in two days the campaign had over 500 supporters. We’ve now got over 1,700.

We are asking people to email their MPs to demand that they vote against Dorries’ abstinence education bill at its second reading on 20 January 2012.

We will also be demonstrating against the abstinence education bill on the 20th January outside the Houses of Parliament, at 10:30am, Old Palace Yard, Westminster. Youth Fight For Jobs, the British Humanist Association, Feminist Fightback, Abortion Rights UK, Queers Against The Cuts and Parents & Carers for Sex & Relationships Education are supporting the demo. More information and the Facebook event are here.

[The image is a photograph of a woman at a demonstration carrying a handmade placard which reads “Just say no to Dorries”. She is wearing a t-shirt which reads “I am the pro-choice majority”. The photograph was taken by Beth Granter, and I didn’t realise this until I had already uploaded it. Serendipity, and Creative Commons Licences collide]