I’m so happy there’s an Annie Clark. For a lady with a few too many growly-voice bearded US indie bands on her iPod, she’s a pure stinging ray of relief. She does incredible things with electric guitars that lead to breathless reviews in pasty bearded music blogs. Her voice is unapologetically showy and she’s got a canny ear for anything you might care to pull out of your music box, from a vibraphone to a triangle. She sings twisted little rhymes about sadness and passion. She’s lived, she’s travelled, and she’s dropped out of music school.

You’ve only got to know that Oklahoma-born Annie once played and toured the world with The Polyphonic Spree and Sufjan Stevens to guess that the music she makes might be something out ordinary. Poetic, odd, acerbic and joyful: her output under the moniker St Vincent has taken on all these elements that characterise the music of her old pals, but over the course of three intriguing albums, she’s climbed up and become one of the most exciting frontpeople of recent times.

Her debut album Marry Me was unleashed upon a delighted music press in 2007, demonstrating Annie’s natural gift for delightfully complex arrangements, sparkling instrumentation and twisted lyrics. The tangled path it carved between deluded madness and sheer joy would become St Vincent’s signature style. Pitchfork described standout tune ‘Your Lips are Red’ as a “tribal freakout,” while ‘All the Stars Aligned’ saw Annie scaling dewy mountains like an indie-rock Julie Andrews.

‘Cruel’ is kaleidoscopic and stompy, all butter-wouldn’t-melt vocals and dark disco beats: Blondie in a blender

A smattering of awards and tours later, Annie buckled down to album number two. Actor (2009) built on the baroque arrangements and bounding experimentalism of Marry Me but took them somewhere altogether more plugged-in. The sugar-spun vocals were like a layer of butter cream over a throbbing, disturbed electronic pie. Annie claimed that her songwriting was influenced by Disney films – Snow White and MGM production the Wizard of Oz lurked between the lyrics in shimmering technicolour. The songs are also littered with angst-ridden women: bored, paranoid, fantasising, cackling women. 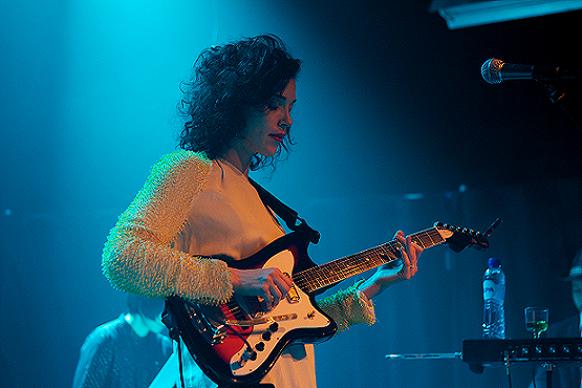 Strange Mercy is Annie’s grown-up album. Recorded in Seattle with “just a guitar and a voice,” the songs are more direct and self-assured than ever before. Annie’s in control, wielding her instrument of choice like a weapon. The rollicking riffs and instrumental flourishes dance and play off her sometimes jarring, sometimes saccharine vocals. Her lyrical style is frank but mesmerising; more David Lynch than Disney this time around. And while the song structures are simpler, the grooves are as beguiling as ever.

Kinky opening track ‘Chloe in the afternoon’ kicks off the proceedings with an excruciating mess of guitars and painful yelps before giving way to a big, chunky slab of a chorus. In a sadistic take on Éric Rohmer’s 1972 film Love in the Afternoon, (released as Chloe in the Afternoon in the US) about a man whose fidelity is challenged by his intimate afternoon rendez-vous with a female friend, the song’s heroine carries a “black lacquered horse-hair whip.” The lacerating riffs bring that whip uncomfortably close to the listener’s eardrums. While Annie twitches and teases us throughout the album, lyrically she’s often the one taking the pain.

Annie is becoming a mistress of beautifully-crafted millennial robot-rock. The spacier moments on the album like the gorgeous ‘Dilettante’ and title track ‘Strange Mercy’ evoke Air, Daft Punk and Goldfrapp with their otherworldly funk

She’s having some fun along the way, of course. ‘Cruel’ is kaleidoscopic and stompy, all butter-wouldn’t-melt vocals and dark disco beats: Blondie in a blender. And the album hits its stride with ‘Surgeon’, a big slab of gyrating dream-pop with a squealing riff that would make Prince blush.

‘Northern Lights’ starts off sounding like something from the OC soundtrack, but it spirals and trips itself up repeatedly in a cacophony of clashing sounds, all tied together by Annie’s voice – the whole affair collapses in a giggling pile at the end.

Annie is becoming a mistress of beautifully-crafted millennial robot-rock. The spacier moments on the album like the gorgeous ‘Dilettante’ and title track ‘Strange Mercy’ evoke Air, Daft Punk and Goldfrapp with their otherworldly funk.

But Annie remains candid and confessional as ever. ‘Cheerleader’ is seeped in regret – “I don’t know what I deserve” – but sees Annie triumphant, having decided just where she stands in this complicated game of womanhood. “I’ve played dumb when I knew better,” she reflects, but “I don’t wanna be a cheerleader no more.” It’s unlikely we’ll see Annie cheering from the sidelines anytime soon.

The album’s sleeve art sums things up nicely: the shape of a toothy growl, or scream, strains to gnash its way through a silky white fabric, stretched tight and shiny like PVC. There’s pain, there’s noise, there’s bondage within, bursting at the seams of its delightful glossy coating.

Strange Mercy is out now

First image of Annie Clark taken in Amsterdam in 2009 by Guus Krol, shared via a flickr creative commons licence.

Second image of Annie Clark by Stephan Chrk taken in The Hague in 2011. Shared via a flickr creative commons licence

Louise Allan is a reader, writer, listener, flâneur based in London. Her resolutions for 2012 are do more of everything and less of nothing.