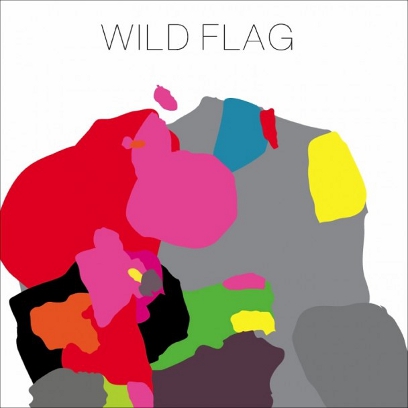 From the opening punch of the eponymous first album by riot grrrl supergroup Wild Flag, you’ll want to party like it’s the mid 1990s. I’m going to say that again, because it’s almost as awesomely fun as the album’s ‘shake shimmy shake’ attitude: riot grrrl supergroup Wild Flag. First ever all grrrrl supergroup, even. The band represents a dream reunion of bands that made the Sichel sisters’ 1997 film All Over Me rock: specifically Sleater-Kinney and Helium. (This is still the greatest lesbian coming-of-age drama ever and was released on DVD earlier this year by Peccadillo, so you have no excuses not to see Leisha Haley as a pink-haired riot babe getting it on with the woefully under-rated Allison Folland.)

All Over Me offers an excellent entry point into the brief moment in the mid ’90s when the feminist punk-grunge-rock-whatever mélange put out by bands from Bratmobile to Skunk Anansie was on every mixtape and every cute girl’s stereo. If you missed Sleater-Kinney and Helium, here’s a recap: Sleater-Kinney hailed from Olympia, Washington but made their name as a Portland, Oregon band. Initially a side project of Corin Tucker (Heavens to Betsey) and Carrie Brownstein (Excuse 17), the band brought the political punk of Olympia to Portland, which contested Seattle for the title of Alt.Music Capital of the Alt.Universe throughout the mid ’90s.

This tight quartet is unafraid to let chaos rip, and revels in the chugging and chiming guitar sounds of grunge-era 4AD

With third member Janet Weiss, they recorded five albums, opened for Pearl Jam on a stadium tour in 2003, and announced a hiatus in 2006, as Tucker decided to focus on motherhood. As well playing in a variety of side projects, Brownstein wrote, produced and starred in the online comedy series ThunderAnt. This was picked up by IFC and Lorne Michaels last year to become a TV sketch series called Portlandia, possibly the only US TV series to include a regular sketch set in a feminist bookstore (Women and Women First) that was equally satirical of some outmoded attitudes in second-wave feminist businesses as well as some of post-feminism’s great ideas – pole-dancing classes being one such.

In Wild Flag, Sleater-Kinney’s Brownstein and Weiss are joined by Mary Timony, formerly lead singer of the Washington D.C. rock band Helium. Timony brought a playful pro-sex feminist attitude to the band’s conventional grunge and, in her solo career, she toured with Le Tigre and released three albums of startling and beautiful drone weirdness on alternative label Matador, as well as a Mary Timony Band album on Kill Rock Stars (Bikini Kill’s label).

This panoply of mid ’90s riot grrrl joy is also joined by Rebecca Cole; all four of them have played together at various times in various side projects and it shows. This tight quartet is unafraid to let chaos rip, and revels in the chugging and chiming guitar sounds of grunge-era 4AD, with a punky shimmer of backing harmonies, Patti Smith-like yelping vocals (check out the chorus on ‘Boom’) and fast, hard beats that will have you bedroom dancing.

The lyrics, where you can catch them through the wall of noise, will also have you both singing along and laughing: rhyming ‘ruthless’ and ‘toothless’ in ‘Endless Talk’ pays tribute to the sublimely shallow fun of girl-pop past. While there’s nothing here that has the precise rage of Sleater-Kinney classic ‘All Hands on the Bad One’ or Le Tigre’s rant-and-rave, there’s also an overwhelming force of feminist pleasure in making a noise, both vocally and instrumentally, that says it’s OK to let your hair down/put your hair up/shave your head/braid your leg hair and “shake shimmy shake”.

In true punk tradition, the album – and the songs themselves – are short and sweet. ‘Boom’ has the playful sexual aggression of Timony’s work with Helium, including the outrageous line “If you need help with your motor / You can borrow mine”. ‘Short Version’ and ‘Electric Band’ in the centre of the album are probably the most rapturous songs, equally great for getting ready to go out or spinning at a LadyFest benefit, while closer ‘Black Tiles’ is the hands-in-the-air anthem that is just crying out for a new Sichel sisters film to soundtrack. Maybe a film about three women who met at Girls’ Rock Camp as teenagers, then gave up their dreams of changing the world one song at a time. They meet again as adults (dragged to karaoke by their bosses?) and decide, for a laugh, to put the band back together for a big occasion (a mutual friend’s wedding, for example) but realise they are really onto something. Cue tears about motherhood, much bonding over old zines and their teenage kids coming round from embarrassment at their Moms’ too coolness. Over the end credits the shout-sung chorus of ‘Black Tiles’ resounds:

All we can hope for is a light

For all we know we’re just here

For the length of a song

Not that Hollywood is likely to make a movie about women making music for themselves. Not even if Kristin Wiig wrote it. If you went to see The Runaways last summer hoping for righteous babes throwing out rock ‘n’ roll licks and were sorely disappointed, this short, sharp set – epitomised by the rhythm stick-revising and ridiculously earwormy ‘Glass Tambourine’ – will more than make up for it, or rather have you reaching for your punkiest make-up and hitting the mosh pit with your hands in the air.

If you need an antidote to family get-togethers – one you can share equally with your Raincoats-loving aunt, your Crystal Castles-loving younger sister and your Yeah Yeah Yeah’s loving boyfriend/brother – Wild Flag might be just the New Year’s turkey work-off you’re looking for. As the band say on their MySpace page: “Apt adjectives for describing the band’s music: wild. Also: flaggy.”

As grrrl music goes, this is definitely waving not drowning. 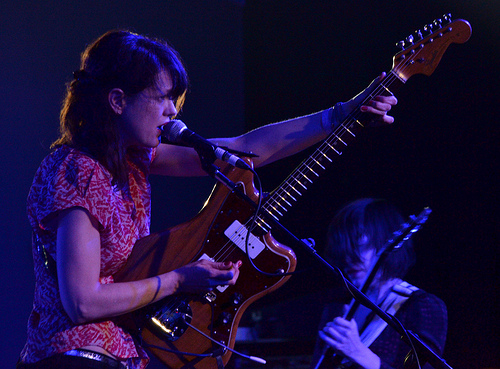 Picture of Wild Flag at All Tomorrow’s Parties Nightmare Before Christmas, Butlins, Minehead, December 2011 by smokeghost, shared under a creative commons licence. This shows Mary Timony with guitar at a microphone in the foreground and Carrie Brownstein in the background, also with guitar. Both are bathed in blue tinged light.

Inspired by the sketch show Portlandia (Carrie Brownstein’s other new project – does she sleep?), Sophie Mayer is considering a trip to Portland OR, where apparently the dream of the 1990s is still alive and it’s like Gore won, not Bush