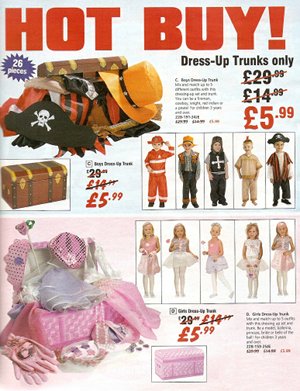 Are we being manipulated into a faux moral panic over the ‘sexualisation’ of young girls? That’s the question that Ruth Whippman poses today.

She talks about her experiences as a TV researcher – basically the fixer of the TV world, who searches out – or sometimes manufactures – the story:

After days of scouring the darkest corners of the high street, I would draw a blank. Despite the compelling motivation of the TV researcher’s crushing fear of failure, it was almost impossible to come up with a single item that even the most assiduous Daily Mail hack could get particularly worked up about.

In fact, Ruth makes a compelling case that the most recent government review on the issue of the commercialisation of childhood hyped up the issue of ‘sexualisation’, at the expense of dealing with the much clearer problem of gender stereotyping.

Ruth pulls out this, er, interesting case study which was cited in the Bailey review:

We were selling chemistry sets at a rate of 15,000 per annum, but when we put them in pink packaging and called it a craft activity sales went up to 80,000-120,000 sets per annum ever since!… Experience has taught us that the success or otherwise of a toy depends largely on… communicating quickly to the consumer whether a toy is best suited to boys or to girls.

As Ruth says, this “seems to put Bailey in the unlikely position of defending gender stereotyping on the grounds that it furthers the noble cause of Helping Shops Sell More Stuff, a viewpoint one might think was a little out of place in a document that is supposed to be combatting the commercialisation of childhood”.