New review: ¿Which Side Are You On? 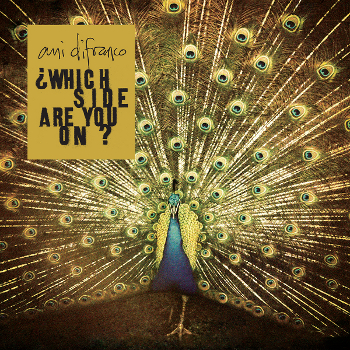 If you like folk or indie music but don’t happen to know the work of feminist icon Ani DiFranco yet, you’re in for a journey of discovery. The singer has released a total of 17 studio albums over the last three decades and, with Righteous Babe Records in 1990, became one of the first independent artists to launch her own label. I’ve just posted Ruth Rosselson‘s review of Ani’s latest album ¿Which Side Are You On? where she reports that Ani has not lost any of her politics as she’s matured:

Not afraid to tackle the theme we don’t hear in songs very often, the sombre ‘Amendment’ takes up the thorny (especially in America) issue of abortion, arguing that it is central to the civil rights of women. In the more upbeat ‘Promiscuity’ Ani likens promiscuity to travelling the world – “some of us like to stick close to home and some of us are Columbus.” It’s a fun song, yet there’s a serious message behind it. I love it when she sings: “How you gonna know what you need, what you like, ’til you’ve been around the block a few times on that bike?”

As DiFranco herself has said in a quote on the Righteous Babe site:

“I’m testing deeper waters with the political songs on this album… I feel a little bit frustrated, politically desperate. After having written hundreds of songs over decades, I think, ‘Now what? How far can I go with this? Can you sing the word ‘abortion,’ can you sing the word ‘patriarchy’ – what can you sing and get away with?’ I guess I’ve been pushing my own boundaries of politics and art. Seeing what people have the ears to listen to…”

The album features a variety of guests, including percussionist Ivan Neville and keyboardist Cyril Neville backing DiFranco throughout it, along with tracks featuring Anaïs Mitchell and Pete Seeger.