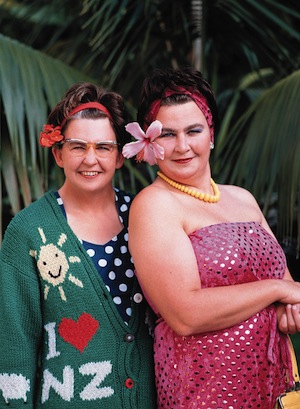 This is a guest post by Madeleine Hodge from November Films. She has written reviews for RealTime Arts, Un Magazine and Senses of Cinema in Australia and Punctum Magazine in the UK.

The Topp Twins: Untouchable Girls (directed by Leanne Pooley) tells the story of the world’s only comedic, singing, yodeling lesbian twin sisters, Lynda and Jools Topp, whose political activism and infectious performances have helped change New Zealand’s social landscape, while turning the sisters into well-loved cultural icons. The film premièred at the Toronto International Film Festival in 2009, where it won the Cadillac People’s Choice Award for Best Documentary.

In parts concert film, biopic, historical record and comedy, the film shows the twins sharing their stories, from their coming out to Jools’ recent brush with breast cancer, with laughter, honesty and wisdom. The film features a series of in-character interviews with some of the Topps’ hilarious comedy alter egos, including candid chats with the two Kens, Camp Mother and Camp Leader and the Bowling Ladies. These are combined with exclusive archive footage, personal interviews and home movies.

It has often been said that if the story of the Topp twins were fictional, nobody would believe it. From rural backwaters of a New Zealand farm to busking on the streets of Auckland, to performances at the Rugby World Cup and London’s West End stage, their appeal is infectious.

Over the years the twins have morphed from radical activists into Kiwi ‘national treasures’, ‘cultural ambassadors’ and finally, according to The Herald (Glasgow), into New Zealand’s “finest artistic export since lamb cutlets!”

The Topp Twins: Untouchable Girls will be touring UK cinemas, supported by Breast Cancer Care. The dates are as follows: