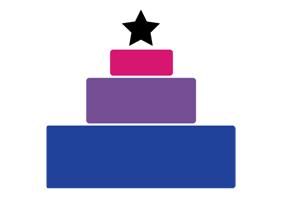 This is the first contribution from Libby, one of our guest bloggers for this month

I’ve been involved in bisexual activism and community-building for around seven years. Throughout that time, I’ve been constantly and happily surprised by just how many bisexual-identified folk choose label themselves feminist.

Here’s the lack of science bit: I do not know what proportion of the UK population considers itself feminist. If I had to make a (semi-educated, optimistic) guess, I’d say it was around 30%; in bi communities that proportion could be twice that and more. This figure is based on anecdotal evidence and probably skewed by my own feminism and the activist circles that I run in, but I’m not the only one to have made this connection. In a world where feminism is still a dirty word, the bisexual community embraces both the term and its politics.

Bisexuality (or pansexuality, if you prefer), by its very existence, denies the conventional wisdom that the only successful romantic relationship is one between a (cis)woman and a (cis)man; it denies the binarism of male/female; homo/hetero; either/or: bisexuality is, undeniably, a threat to the patriarchal, heterocentric status quo. Once you represent such a threat by one facet of your personality, is it a slippery slope toward embracing more? Is feminism an inevitable by-product of bisexuality?

Bisexual and feminist subcultures have a lot in common. They are both woman-dominated communities (though the former less so); they both subvert traditional gender roles and they’re both frequently (deliberately?) misunderstood. There is a certainly a natural affinity between the two. But surely this isn’t reason enough for the two to so often overlap?

Biphobia manifests in many ways but one of the most common is slut-shaming; the belief that bisexuals (regardless of gender) cannot be monogamous, that they are vectors of disease and are indiscriminate in choosing sexual partners: all of these represent judgements on with whom one should or should not be having sex. The demand for sexual freedom is entry-level, user-friendly feminism and it’s hard to argue with. The feminist movement is huge and nebulous and can be intimidating to outsiders but as the rise of the Slut Walk has demonstrated, slut-shaming, sexual agency and the politics of consent are high on the agenda for most of us, and affords an empathic kinship between bisexual and feminist subcultures.

Movements like Slut Walk exemplify feminism’s embrace of grass-roots activism. Local feminist networks and groups flourish. When bisexual activism started to gain momentum as a movement, it too claimed a grass-roots, community-focused approach and the practice continues today. BiCon, for example, is an entirely volunteer-run annual conference/convention for anyone who thinks that sexual identity isn’t just a matter of gay or straight. The programme teems with workshops on myriad subjects; I can’t remember a BiCon that didn’t have at least one addressing feminism or feminist issues: at the biggest get-together of bisexual people in the UK, feminism is a hot topic. The event attracts LGBT activists and community-seekers in equal measure. There’s a strong case to be made that queer activists, with equality ever their watchword, are more likely to be aware of ingrained gender inequalities in our society and that political awareness begets political identities.

We’ve come a long way since the lesbian feminists of the late second wave attacked bisexuality as a phenomenon which undermined the fight against compulsory heterosexuality, and today only a little distrust for bisexual women still remains within the radical feminist movement. In this more liberal feminist community bisexuality is embraced as just another of the endless variants of personhood. The bisexual community, it seems, has responded in kind.