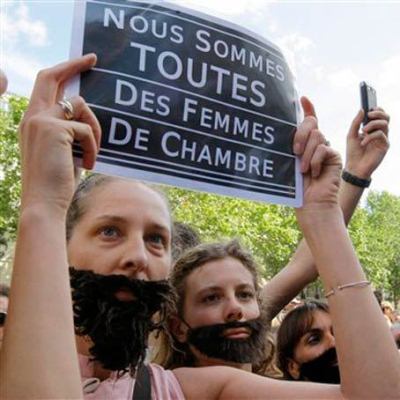 The photo was taken at Paris SlutWalk, and the placard reads “We are all hotel maids”.

Dominique Strauss-Kahn has been invited to speak at the Cambridge Union. The university’s Women’s Campaign has responded with a petition to disinvite him on the grounds of his attitudes and behaviour towards women, and will be protesting outside the Union if his speech goes ahead.

Since the age of about seven, “feminist” has been probably one of the first words I’d use to describe myself. My definition of feminist has developed into something distinctly less warlike since that age; but the misogyny of Strauss-Khan, and the difficulties in holding him to account, evoke the immeasurable frustrations of a seven-year-old whose pigtails are being yanked by boys.

Dominique Strauss-Kahn’s attitudes to women are warped; there is extensive evidence that his behaviour constitutes serial mistreatment. In the last year Strauss-Kahn has admitted that his behaviour towards the journalist Tristane Banon qualifies as “sexual aggression“. He only escaped trial on account of the French statute of limitations. Currently, he is being questioned for his involvement in a prostitution ring. On top of this lies the controversial case of Nafissatou Diallo.

DSK has struck a blow against victims of sexual violence everywhere. The deal with Diallo has demonstrated to victims everywhere that the courage of bringing allegations to light is not enough. Strauss-Kahn’s lawyers argued that a lie on her application for political asylum supposedly proved Diallo an unreliable witness, so the trial would therefore be wasted. Diallo’s past misdemeanours do not prove that she was not raped. Hadley Freeman expresses my sentiments about the case when she says: “Despite the efforts of the DA and Strauss-Kahn’s defence team, a trial most certainly did happen: it just happened to be a trial of the accuser rather than the accused”.

England reflects a worldwide trend in the appalling treatment of those who make allegations of sexual crimes; here, the rape conviction rate is a paltry 6%. These allegations should always be treated seriously, especially considering that the stigma and extremely poor understanding that characterise public perception of these crimes is often enough to persuade victims that any attempt to bring their perpetrators to justice is futile.

I fully support the presumption of innocence, and I do not think it is within the public’s right to denounce DSK as a rapist. But I believe it to be within our duty to hold him to account for his serial misogyny.

Cambridge, so they say, is in uproar. The campaign for disinvitation has provoked cries in defence of freedom of speech. However I do not confuse an impingement on freedom of speech – which involves a systematic silencing – with the denial of a platform and the privileges that accompany it. I would not expect the Union Society to host a speech by a dictator with a serial record of appalling attitudes to human rights, and I do not expect them to host a speech by someone with a serial record of appalling behaviour to women.

Some have justified the invitation on the grounds of his former role as head of the IMF. But the Union Society must acknowledge that this invitation to an authority upon economics and politics also extends to a misogynist; it is impossible to disassociate one from the other.

More than anything I feel it is important for the Women’s Campaign to challenge poor treatment of women, in the university and everywhere. I expect them to defend women, in particular the victims of rape and sexual assault who receive so little support from anyone else. By attacking the DSK invitation the Women’s Campaign are attacking woefully inadequate societal attitudes to those brave enough to speak out about sexual crimes.

Increasingly causal attitudes to such issues emphasise the importance of action: the recent closure of the Unilad website demonstrates the importance of standing up to a culture where the victim doesn’t matter: “If the girl you’ve taken for a drink… won’t spread [her legs], think about this mathematical statistic, 85% of rape cases go unreported. That seems to be fairly good odds”. It was the mobilisation of people denouncing this comment that forced the closure of the website. Rejecting DSK is a part of the wider movement to take rape and sexual assault seriously.

Protesters will be gathering outside Great St Mary’s at 5.30pm tomorrow, to walk to the Union on Bridge Street for 6.00pm. There will also be a pre-protest speakers event at 1.00pm in LG17, The Faculty of Law, Cambridge University, featuring Nafissatou Diallo’s attorney, alongside feminist blogger and trade union activist Cath Elliott.