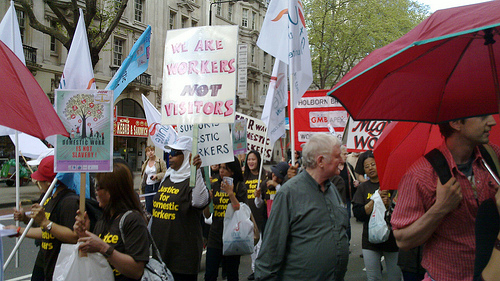 Image shows domestic workers protesting in London. Some are holding signs, reading for example “We are workers, not visitors” and “Domestic work is not slavery”. Shared by Charles Hutchins under a Creative Commons license.

It was protested last summer, but now it’s back. Home Secretary Theresa May has again announced proposals to make migrant domestic worker visas more restrictive, including removing the rights of workers to change their employers.

This measure would deprive workers of one of the few tools they can invoke to safeguard their own welfare in a field of employment which is especially prone to abuse. Workers living in the private households of their employers often have little leverage to enforce their rights to freedom from physical and sexual violence, to freedom of movement, to fair compensation, and to decent working terms and conditions. If the government’s proposed changes are implemented, any appeal to the authorities for help or any departure from the abusive employer could amount to a migrant domestic worker offering herself up for deportation – a grotesque result.

According to a joint press release by Kalayaan and Anti-Slavery International:

Jenny Moss, Community Advocate from Kalayaan, a London based organisation that supports migrant domestic workers, said: “The decision to remove the right to change employer, and therefore remove an important protection from abuse, turns back the clock 15 years to the days when domestic workers were deported for experiencing abuse. This decision makes no sense, its effects are entirely disproportionate to its aims and runs counter to Prime Minister David Cameron’s commitment to fighting slavery, made on Anti-Slavery Day in October last year.”

Before the right to change employer was introduced, abuse was even higher with, with 39% of domestic workers reporting physical abuse, 12% reporting sexual abuse, 89% having no day off and 100% reporting having worked an average of 17 hours-a-day.

Audrey Guichon, Domestic Work Programme Co-ordinator, Anti-Slavery International, said: “By tying domestic workers to one employer the Government will effectively be licensing slavery, allowing employers to bring workers to the UK without providing those same workers any way of challenging or escaping abuse if it occurs. These proposed changes would give unscrupulous bosses the power to threaten workers with deportation if they do not comply with whatever they demand.

“The UK’s treatment of domestic workers will now mirror the situation across the middle east through the internationally condemned kafala system, where the lack of right to change employer without losing the right to residency has led to widespread abuse and high levels of domestic worker suicide.”

In June 2011, the UK government was one of just eight countries, including Sudan, which did not vote in favour of a new international convention that would help protect domestic workers from abuse and slavery.

Please write to your MP to protest this retrograde and inhumane proposal. More resources and information are available at the Kalayaan website.