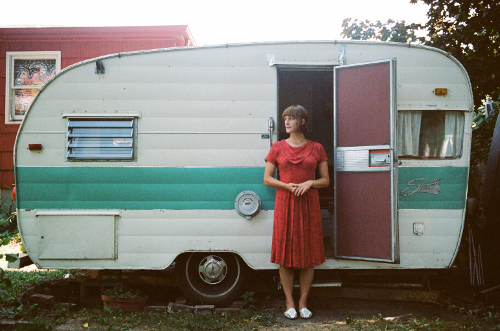 It’s a freezing January evening, a few hours before she’s due to go onstage, and Laura Gibson is huddled in a coat and hat in a corner of a Soho music venue, talking about the effect her home state of Oregon has on her music. She credits the Portland music scene with her success: “Portland is a really wonderful city and I don’t think I would be making music had I not landed in this really supportive community of wonderful and very talented and creative people.”

In person, she matches her dreamy, offbeat musical style, admitting that she is “never one to get up and talk at a party” and that she has to “try and trick [herself] into believing in [her] own importance, in a way”. It’s this timidity that makes Gibson such a compelling performer. She is shy but she isn’t fragile, and when she speaks about her music she glows with quiet confidence. “Part of what makes it so exciting”, she explains, “is that I tend to be a timid person in many areas of my life and making music. I feel like it’s this moment that I can transcend that timidity and if there were no boundaries for me to cross, I don’t think it would be as satisfying for myself or for the listener. Part of the magic of making music is transcending who you are.”

“Everyone is moving West as this rite of passage but I grew up about as far West as you can get. I’ve always wondered – where do you go from there?”

Earlier, Laura was doing interviews in the stairwell, but now she’s poised, birdlike, ready to run off to her soundcheck at any moment. She’s on a whistlestop European tour to promote her third album, La Grande and, today, she’s sharing the bill at The Social with Dear Reader. She flew to London last night and is off to Paris tomorrow – during the gig, she describes the Channel Tunnel as “a revelation” with wide-eyed amazement – but although she must be tired, there seems to be no trace of exhaustion in her nervous energy. 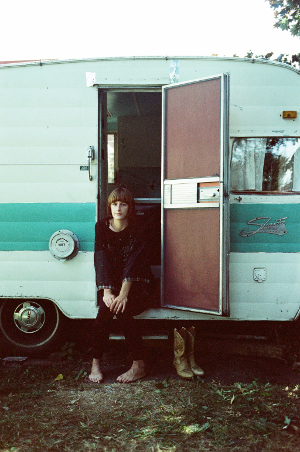 La Grande is easily Laura Gibson’s most ambitious work to date. Her band of five musicians has been whittled down to three for the tour and she clearly relishes the challenge of performing it live. “Having those two records (If You Come to Greet Me and Beasts of Seasons) and touring with these very meditative songs, it felt natural to want to explode outward and really take hold of energy and run with it,” she says. La Grande represents Laura’s growing confidence in her abilities and a gaining of momentum from the success of her previous albums: “I don’t know if I would have made the same record at any other time in my life. I just had this moment in time when I felt so excited and so energetic about making music that I just had to run with every idea and follow every path and every desire and not shut myself down or let any sort of editor voice come into play.”

La Grande is also the album that most clearly expresses Laura Gibson’s roots and pays tribute to the state of which she is so fiercely proud. “In America”, she explains, “there’s this identity of people going out West to explore and there’s this idea of manifest destiny that’s associated with moving West and finding yourself, and so living in Portland where so many people come from, it’s interesting. Everyone is moving West as this rite of passage but I grew up about as far West as you can get. I’ve always wondered – where do you go from there?”

It’s clear that Laura is at her strongest in cramped, intimate spaces

The call to do the soundcheck comes and not long afterwards the venue starts filling up with people. Admittedly, it isn’t hard to pack out The Social’s tiny basement performance space but the gathered crowd, huddled together against the cold, were clearly all Gibson devotees. Although she deserves to play at bigger venues, or at least to have the success that they normally accompany, it’s clear that Laura is at her strongest in cramped, intimate spaces and there’s a sense that this is the kind of environment where her quirky insight into the human condition is best displayed.

Laura’s voice is powerful but gentle and, in keeping with the contained closeness of the venue, The Social is also the perfect place to showcase her warm melodies. The title track makes a stompingly good opener and ‘Lion/Lamb”s percussion pulses through the room. She throws in a few tracks from Beasts of Seasons (the album directly preceding La Grande), covers Kurt Cobain and duets with Cheri MacNeil, the lead singer from the opening act Dear Reader. She even coaxes the audience, all too ready to shed their mantle of cool, into singing along.

It’s not only Laura Gibson’s fans who are enthusiastic about the new material, though. She is visibly excited about her progression as an artist and, whilst it would be impossible to appear remote in such a small space, she comes across as being as passionate, dorky and music-obsessed as her audience. 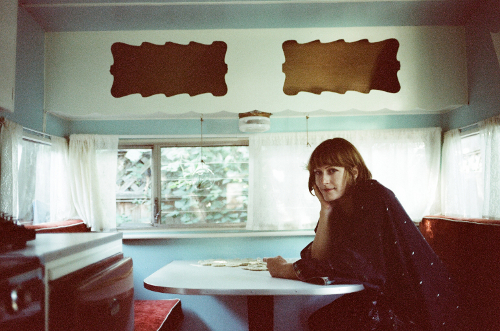 Publicity shots supplied by Workit Media. The first picture shows Laura Gibson looking to her right in an orange dress standing in front of a caravan. The second shows her in black, sitting on the step of the same caravan and the third shows her in the same outfit, sitting at a table in the caravan with her right hand under her chin and looking at the camera.

Kaite Welsh is an author, activist and freelance journalist who has also appeared in The Guardian, Diva, BroadwayWorld, Bitch Magazine, Lesbilicious and on Woman’s Hour. You can find her on Twitter as @kaitewelsh