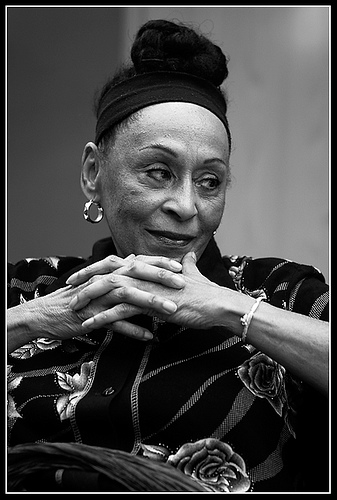 This month’s playlist (on Spotify) starts off with some Cuban jazz from Omara Portuondo, a perfomer whose career spans six decades and who continues to perform as one of the star singers at The Tropicana in Havana.

Things continue in a jazzy soulful vein, taking in another vocal from Pam Hall (whose version of ‘Our Day Will Come’ featured in January’s playlist), alongside 1990s classics from Martine Girault and Jhelisa and a later version of civil rights activist and folk singer Odetta‘s ‘Hit or Miss’.

There is also a track from Norwegian feminist pop star Deeyah. An activist throughout her career, Deeyah spearheaded the ‘Sisterhood’ mixtape project for young up and coming female Muslim MCs in 2008 and is a founder of the recently launched Honour Based Violence Awareness Network.

Another song in the playlist that I heard for the first time recently is ‘Ready for Revolution’ by Dutch Moroccan/Algerian musician Rajae el Mouhandiz. As well as being the first Moroccan woman to study French horn at a Dutch conservatory, Rajae is also the founder of Truthseeker Records and a board member of Ethica. I was prompted to seek out Rajae’s music after reading an article on the HIA website, where she talks about leaving her family and community at 15:

“‘They just didn’t understand that I wanted to be a musician, a rock star, because they expected me to become a mother and a housekeeper and to choose an academic study instead of art.’…’Are you a feminist?’ we ask, and she smiles, nods, explains. ‘I am an undercover feminist,’ she says, ‘because although I am a role-model for many young Muslim girls for having made my own choices–against my male-dominated tribe– I am also proud of my roots, and that is in my music.’“

After a track featuring a performance from poet Nikki Giovanni (from Tupac Shakur’s same titled The Rose That Grew From Concrete album), the mood shifts towards Nu-disco, in the form of the positively euphoric ‘Freak the Night’ by Jessica 6.

Unfortunately, the studio version of ‘Freak the Night’ is not on YouTube but here’s a live version, as it is absolutely not to be missed if you didn’t catch it when it came out last year:

Jessica 6 formed when helping put together a Hercules and Love Affair live show and are followed in the playlist by two more artists linked to that act: Kim Ann Foxman and Aérea Negrot.

Following on in this more dance-orientated section are a couple of tracks Cazz introduced me to. The first is a nice pokey bit of electronica composed and performed by Emika (a single from this year) and the second is a piece from Barbara Panther‘s self-titled album that came out on City Slang last year. (I’ll be posting Cazz’s review of this on Friday!)

A forthcoming release that I’d have liked to include but isn’t available on Spotify yet is the very catchy ‘Factory Boys’ by I Am A Camera. This is due out on 27 March and is said in the press release to be based on the true story of The Dupont Twins, two teenage boys who lied and tricked their way from their home on a gas station in the US Mid West to the New York club Studio 54:

Rounding off the Spotify playlist is some electronic shoegaze dream pop from M83’s Saturdays = Youth. ‘Skin of the Night’ was not initially my favourite track on that album but the dramatic lyrics and Morgan Kibby‘s vocals make it one worth returning to. I went to see the group a couple of months ago and found it most fitting to hear Q Lazzarus playing after the gig ended. When is this synthpop classic going to appear on Spotify? And, more to the point, when is an anthology of Q Lazzarus’s work going to be released so fans don’t have to pay over the odds to get a barely three minute version of ‘Goodbye Horses’ on the Married to the Mob soundtrack? (Original copies of the single are very scarce and tend to fetch over £100 when they can even be found!)

Finally, by way of a bonus track (to possibly be followed up on later), here’s an acoustic version of Marina and the Diamonds’ ‘Primadonna’ which is released on 16 April:

Black and white shot of jazz singer Omara Portuondo by El Humilde Fotero del Pánico, shared under a creative commons licence. This shows Omara in a relaxed pose with her hair in a bun and her hands clasped together just in front of her face. Her left thumb is gently touching her chin. She is looking to her left and smiling slightly.