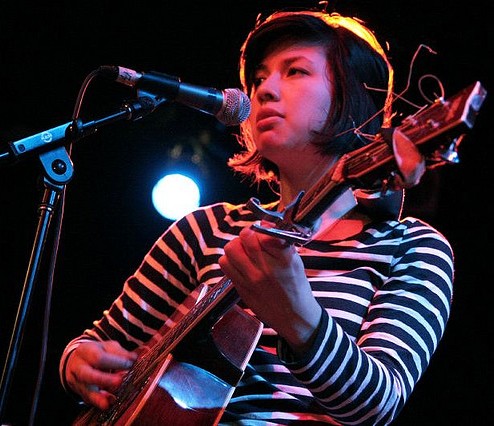 Led by singer and writer Emma-Lee Moss, with guitarist Euan Hinshelwood, anti-folk act Emmy the Great is both a solo and collaborative project. Though the act has achieved cult success, it has yet to be embraced more widely. Described as a lyricist who can talk about emotion without resorting to blunt clichés, Moss’s intensely personal songs “mix themes from myths, fairy tales and saints’ lives, using the voices of archetypal female protagonists” and her lyrics have been said to be Emmy the Great’s “secret weapon“.

“…The show opens with the hauntingly beautiful ‘Eastern Maria’, which is sung almost a capella, and then it’s on to a setlist comprising a good mix of songs from both albums and a couple of new ones thrown in for good measure. Most notable is an untitled tale of homoerotic unrequited love, with the haunting refrain ‘William Blake’ which plays over and over again in my head for days afterwards. Despite having just completed a fairly extensive tour to support the release of Virtue, Emmy are sounding fresh and on top form tonight. As a special feature for the Women of the World festival, the band are also joined by an all-female choir and string section with special arrangements of Emmy’s songs by composer Bridget Samuels, the standout of which has to be the lush 1960s girl-group treatment given to ‘We Almost Had A Baby’.

At the start of the show, Moss surveys the crowd, somewhat dismayed, commenting on the fact that the venue is all-seated and thus people might want to consider consuming a lot of alcohol and sitting on the floor to make the whole experience more bearable. She also jokes that the seats could get uncomfortable during the lengthy reading from classic feminist tracts she has planned for later in the evening. In the event neither floor-sitting nor alcohol are required; the setlist is fast paced and crowd-pleasing and Moss herself is witty and engaging…“

Photo by Oliver Lopena, shared under a creative commons licence. This shows Emma-Lee Moss performing with guitar at the Music Hall of Williamsburg, Brooklyn (10/21/08). She is wearing a long sleeved black top with white stripes on it.