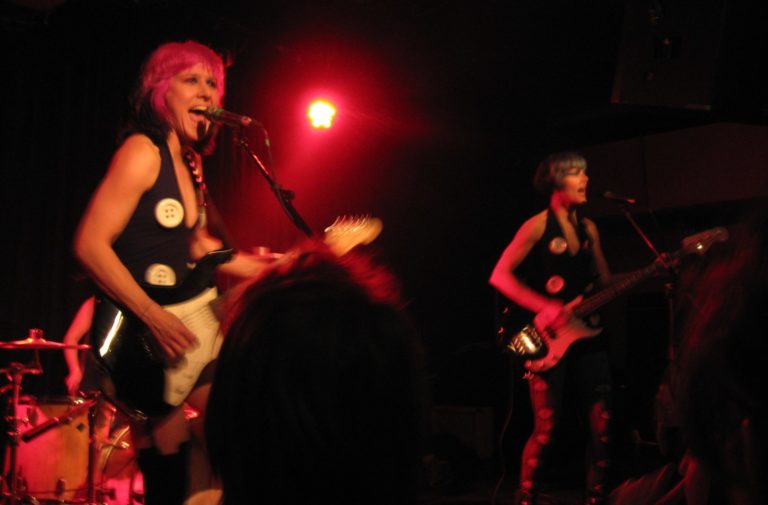 New review: Robots in Disguise at The Lexington You might recognise them from their appearances as their alter egos, “The Electro and Goth Girls” in series one and two of The Mighty Boosh (2004/05) but that wasn’t the beginning, because electropunk-indie-dance duo Robots in Disguise have been making music since 2000.

The band are Dee Plume and Sue Denim. They met at university in Liverpool and took their name from the cult 1980s cartoon and toy collection Transformers. They have since then released four albums: Robots in Disguise (2001), Get RID! (2005), We’re in the Music Biz (2008) and Happiness V Sadness (2011). Hayley Foster da Silva went to see the band live last month and, thankfully, it looks like it won’t be their last live show, despite some rumours before the gig.

Here’s a snippet from Hayley’s review and interview:

When asked about being in an all female band, I’m greeted with cheery laughter, “It’s like being in a never ending hen party!” they exclaim and Dee points out that was the whole point for her: she only ever wanted to be an all girl band after seeing band after band with just men in them. She really wanted to see other women performing. They have noticed themselves that their main fanbase is female which Dee feels proves that other women were also hungering for people like themselves playing music they could enjoy. They also have the undeniably feminist song ‘Girl’ which is inspired by a feminist textbook about language and lists many of the derogatory terms used for females.

My final question is obvious. I ask if they consider their selves a feminist band and there is absolutely no hesitation, just a unanimous “Yes!”

Pictures of the band performing by Hayley Foster da Silva, shared under a creative commons licence. The first shows Sue Denim with her guitar and the second shows a close-up of a pink fringed Dee Plume.