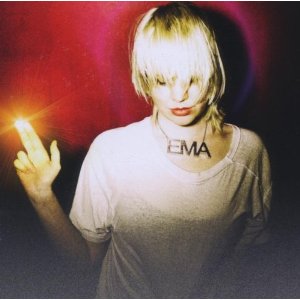 Having only heard the soul-bearing single ‘California’ and witnessed a fuzzy, furious and compellingly great support act performance by Erika M. Anderson, it’s a little surprising to be confronted with ‘The Grey Ship’, the first song on her accomplished debut album Past Life Martyred Saints.

Opening with a seven-minute dirge is a brave move, but it pays off as the track gradually gathers pace and the dynamics slowly snowball. By the end, you can visualise her leading an army of alienated American teens, all staring accusingly – “you’ve fucked up yet another generation, are you proud of yourselves, huh?” – as they set sail from LA with only the edge of the world and oblivion on their minds.

Apart from some Velvet Underground and Raincoats-inspired organ and violin drones, the musical reference points of the song and the album as a whole are impeccably 1990s ‘US alt-rock’; distortion pedals, Nirvana-esque riffs, shades of Courtney Love and Kims Gordon and Deal in Anderson’s vocals, antifolk a-cappella, that buttery, wobbly Soundgarden guitar effect and a dose of Nine Inch Nails whiplash drum patterns and voices-in-the-head layering and looping. It’s like a grubby C-90 mixtape has been dug out of an older sibling’s long-vacated bedroom and its tinny and deteriorated contents played back with unquestioned reverence, then melded and replicated expertly on ProTools.

In short, angst is back

Though this could be interpreted as simply part of the recent phenomenon of indie acts collectively deciding it’s been long enough to use the ’90s for inspiration (Wavves, Best Coast, Yuck, Mazes et al), it’s clear with EMA that it’s not just musical tropes which are being revived but also the structure of feeling they were intended to convey. We’re right back to that early ’90s moment when a unified counterculture, kept alive by punk and its fallout, finally imploded and its most visible remnants turned to self-loathing and hopelessness as Francis Fukuyama falsely proclaimed the end of history and the total victory of consumer capitalism.

In short, angst is back.

In a way, it’s understandable to journey back here for an appropriate ‘sound of today’ – more and more people are depressed, taking SSRIs and hankering after that next status-imbued purchase, knowing it won’t make up for the emptiness inside. Despite the recession, our eminent political leaders show no signs as yet of abandoning the political project begun by Thatcher and Reagan and intensified in the ’90s as Labour and Democrats alike sold out to it.

Nonetheless, I can’t help feeling that this kind of thing is as problematic now as it was then. Despite her occasional astute observations, such as the recuperation and selling back of the hippie dream (“you’ve corrupted us all with your sexuality/you tried to tell me love was free”), Anderson spends most of the time compressing the wider world into her own sadness rather than telescoping outwards. “I guess the record is mainly about one person – me”, she stated to Contactmusic. Of course, I could defend the album’s themes in numerous ways. To begin with, maybe it’s a purely personal catharsis. Anderson claimed in an interview with Pitchfork that “having people die” and “breaking up” inspired it. However, picking a sound palette so evocative of a particular moment, penning lines like “fuck California/you made me boring” and acknowledging social issues like the Columbine killings in interviews suggests there’s more going on than the age-old sublimation of personal tragedies into music.

We shouldn’t underestimate the value of knowing that someone else feels as we do, and hearing this expressed in bold, powerful and captivating music

Or it could just be one for the teenagers. “Some of these songs are really old”, the 22-year old Anderson has revealed, dating back to her own teenage years. Haven’t teens always needed this kind of melodrama to mirror how they’re feeling? And there’s melodrama a-plenty: “These drugs they are making me so sad”, she sighs in ‘Coda’, while in ‘Marked’ we get the inevitable dulled-senses reference to self-harm, accompanied by a harrowing razorblade effect simulated by a plectrum across the guitar strings: “My arms they are a see-through plastic…a skinless mass”.

That, however, begs the question of how much popular music simply responds to pre-existing feelings in the manner of ‘market demand’ and how much it validates and thus perpetuates these feelings. I don’t mean this in a censorious, Tipper Gore-like manner, but how positive is it for kids to hear this stuff?

We shouldn’t underestimate the value of knowing that someone else feels as we do and hearing this expressed in bold, powerful and captivating music. Nonetheless, if you’re holed up in your room planning your own obsolescence whilst carving pretty patterns on your forearms, and someone gives you the perfect soundtrack, it provides romanticised consolation and distracts you from the fact that things could be otherwise.

And things certainly could be – while mainstream politics has not yet budged, the last couple of years have witnessed the biggest uprising of dissent in the US and western Europe for decades. People are waking up and part of that waking up should involve questioning by all cultural means possible why so many feel so low and disenchanted with what life has to offer, rather than simply expressing such emotions.

If we must “do the ’90s” again, it’s not as if there are no strains of socially aware and oppositional US alt rock to draw on – riot grrrl, for instance. And gender is an issue here: ‘Marked’ contains a line that suggests a masochistic longing for domestic abuse in lieu of any positive sense of continuity and security: “I wish that every time he touched me left a mark”. It would be unhealthy to repress the expression of such desires, and rock music, with its history of transgression, is a good way of putting these across. Their expression, though, should lead to speculation on what kind of a world leads women (and men) into these disturbing desires.

In the context of self-absorbed angst, however, this is unlikely. The closest the media have got to analysis so far is Anderson’s claim in a Quietus interview that the line is not necessarily meant to be literal, that it’s about violence in a broader sense, an interpretation which dissipates the issue rather than prodding it.

Thankfully, however, Anderson has indicated that introverted agony is not a direction she wants to pursue forever. Speaking to PopMatters, she said “I read something once by Milan Kundera that talked about the difference between a poet and a novelist, and how when you are under 30 you are so self-obsessed that it’s all you can write about. You’re a poet. It’s only once you get a little older that you can start to write about others, you can become a novelist. I think I’m beginning that transition.” It will be interesting indeed to see her weld her unquestionable musical skill to a vision which tears the curtains of the dark bedroom back and flings open the window.

EMA will be touring the UK in May. Dates are as follows:

David Wilkinson is writing a PhD on post-punk, feminism and left-wing politics. He will be talking about the legendary Manchester punk and post punk fanzine City Fun at the Victoria Baths Fanzine Convention in Manchester on 19 May.