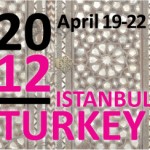 The purpose of these forums are to strategise, energise, and re-negotiate the women’s global movement. It’s held in a different part of the world every three/four years. This year it’s held in Istanbul and Turkey. When AWID decided the location in 2009, they had a inkling the feminist movement was going to take off in the Middle East/North Africa region (MENA), and luckily they were right! The Arab Spring last year has really made this region hot for global movements. Many of the sessions are focusing on building upon the existing feminist movement here in Turkey.

The forum boasts of 2500 participants from over 60 countries. AWID long prides itself in trying to have an inclusive movement. The plenaries are translated into seven different languages. Further to be sensitive about the political issues here in Turkey, three of the languages are Arabic, Turkish and Kurdish. Other ways the movement strives to be inclusive is the large number of young feminists who participate in the forum. The last forum I attended, in 2006 in Thailand had over 30% women under 35. I feel this one is the same. They have made all the possible arrangements to ensure women with disabilities, HIV/AIDS have safe spaces.

AWID forums have a general feel about them. They generally include a wellness centre which includes free massages! They strive to make this a space to re-energise and to spark the creativity. I have to e honest, I’ve been feeling rather stagnant lately with ideas but I’m just flowing with new ideas now.

What’s really great is despite the last forum I attended was 7 years ago, I still notice faces that seem familiar. There’s a great sense of family inclusion despite 2500 women. What I have to remember is feminist movement is small and the circles know each other very well. I passed by the Women’s International League of Peace and Freedom (WILPF) and droped a few names, I even found old friends among WOMANKIND Worldwide.

I’ll try to record my thoughts at the end of each day. It’s hard to do because seriously, the events are packed from 8am – 9:30pm.

If you would like real-time responses, Zohra has been tweeting her thoughts at each session. You can find her at @zohramoosa hashtag. Further, the awid hashtag is #awidforum