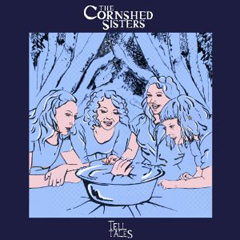 Research for this review led me down some interesting paths. On the way, I’ve been reminded of the old criticism of London music fans, that we’re all self-regarding hipsters whose view of the rest of Britain stops at the Watford Gap motorway service station. While there may perhaps be a grain of truth in that for some people, the other side of the coin is that a lot of good things which may be happening elsewhere pass us by – and often we’re the losers in that one-way exchange.

Sunderland in Tyne and Wear is a pertinent example. For those Londoners who have heard of this place, possibly its most famous musical emigrants are Dave Stewart (ex-Eurythmics), Bryan Ferry (ex-Roxy Music) and Lauren Laverne (ex-Kenickie member turned TV and radio presenter), to name but three. Yet, there exists a vibrant musical community which, despite (or maybe because of) its compact nature, is more than thriving. Field Music, Frankie & The Heartstrings, The Futureheads, The Lake Poets: there’s a diverse range of musicians and musical styles – to which may also be added The Cornshed Sisters.

In fact, the real strength – and the focus of their debut CD, Tell Tales, lies in the gorgeous four-part vocal harmony singing, which benefits immensely from a combination of minimal instrumentation and sympathetic arrangements

An interesting insight into the share-and-share-alike nature of the working arrangements behind the band and the recording and touring processes was given by Marie (coincidentally another ex-Kenickie member) of The Cornshed Sisters, who said last year in an interview with Journal Live

It’s quite self-contained and in loads of ways that’s useful because it means people have a chance to get good before anyone else sees them.

It’s been difficult to find a biography for The Cornshed Sisters apart from the one on the website of Memphis Industries, their record label, which, although entertaining enough to read, is ultimately a little heavy on the hyperbole:

if they were raised as sisters it was by a father who sang like an angel and by a mother who loved the devil’s music.

However, a little bit of digging on YouTube shows videos of Jennie, Cath, Marie and Liz (who comprise The Cornshed Sisters and may or may not be siblings) from performances in 2008 and their MySpace page predates those.

So what do we know about the music itself? Thankfully, the PR copywriter’s enthusiastic approach to namedropping other musicians doesn’t manifest itself in music itself. In fact, the real strength – and the focus of their debut CD, Tell Tales – lies in the gorgeous four-part vocal harmony singing, which benefits immensely from a combination of minimal instrumentation and sympathetic arrangements. An understated production by Jennie’s partner Peter Brewis of labelmates Field Music (and The Futureheads), provides a crystal clear, if perhaps slightly cold setting for the folky-pop music.

Opening with ‘Dresden’, a radically reworked cover of Les Cox Sportifs’ punky paean to the idea of love as war, the stage is set. A musical backdrop of gently strummed guitars and piano builds to a crescendo, delivering what is, for me, one of the album’s highlights. Of course, the reworking of post-punk pop music into an acoustic setting is nothing new: I’m reminded of The Be Good Tanyas’ cover of ‘When Doves Cry’ and The Futureheads (with whom the The Cornshed Sisters have just finished a short UK tour) new album Rant explores similar musical territory with:

“an entirely a cappella album of R&B covers, traditional folk songs and rearranged morsels from their back catalogue” (The Independent). 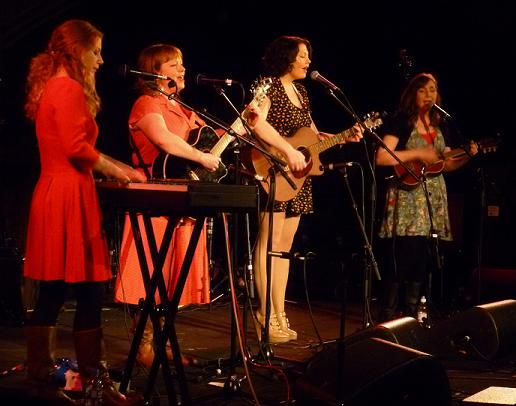 Musically, the album follows much the same format with acoustic guitars and piano providing the musical underpinning for ten songs which all examine aspects of a central theme of love: loves lost, loves found, love and friendship and even a more visceral take on love as cannibalism in ‘Ocelot Song’:

We’re not hungry but still want to eat

Feel the strings of your flesh in our teeth

There are two exceptions to the guitar/piano musical backing (but not the lyrical direction): ‘Tommy’, a mournful musing on the theme of unrequited love of a woman for a drowned man. The strongest track on the album, it’s a song which shows how four unaccompanied voices can produce music which is both ancient and modern, simple but complex, easy on the ear and yet emotionally powerful.

Similarly ‘Pies For The Fair’, with its quirky lyric around the theme of love as food, spotlights the impressive close-harmony a capella singing which is the hallmark and strength of The Cornshed Sisters but is underpinned with polyrhythmic handclaps which complement and accentuate its unusual seven/eight time signature.

As debut albums go, this is a self-assured and well-constructed set which I’ve thoroughly enjoyed hearing and would recommend to anyone who’s been following the recent resurgence of contemporary folk music in the UK. However, I have this niggling feeling at the back of my mind that the recordings only hint at what The Cornshed Sisters are capable of and I suspect catching them live might be the best way to really experience their unique and evocative vocal style. Here’s hoping they return to my adopted home town of London soon to show the floppy-haired hipster fops of Hackney, Dalston and Shoreditch that there’s more to live music than the current retro indie guitar revival.

You can hear a sample of The Cornshed Sisters Tell Tales, including new single ‘Dresden’ by clicking here:

Second image, The Cornshed Sisters performing at the Union Chapel, London, on April 4 2012. By John Kell, used via a flickr creative commons licence

Helen joined the bloggers’ collective at The F-Word in 2008 and has recently taken on the role of Events Editor. Music has been an important part of her life for as long as she can remember and her listening tastes are eclectic – 1970s dub reggae and early 1990s UK progressive house being particular favourites – but she also has a long-standing penchant for the music of women singer/songwriters across a range of genres.