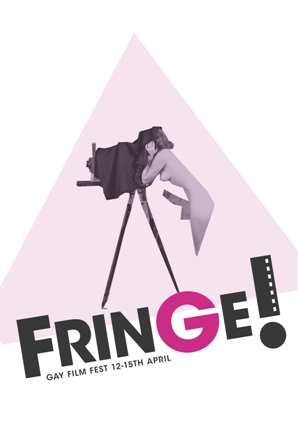 This is a guest post by Selina Robertson, who along with Sarah Wood runs Club Des Femmes, a queer-feminist pop-up film festival. She is a freelance programmer and writer and has recently left her beloved Berlin for the perils of London.

FRINGE!, East London’s alternative queer film festival, is back for the second year running; so diary-date 12-15 April, pull out those skinny jeans, beehive your hair-do and get those moleskin notebooks to the ready!

A bit of background: the festival was set up last year by a group of savvy volunteers in response to the London Lesbian and Gay Film Festival cuts. It was planned in just eight weeks and managed to pull in pretty impressive 2,000 people, so expectations are high for 2012.

This year’s festival is all about showcasing a ‘confetti burst’ of queer culture, stretched over four days, with 30 films, events, art shows and parties (many events are free). If you want to find out what’s hot and happening in contemporary (UK and beyond) queer culture then keep reading….

Highlights include the New Queer Cinema retrospective, celebrating the 20th anniversary of feminist film critic B. Ruby Rich’s 1992 article that coined the phrase and kick-started the drive behind a whole generation of politically conscious aesthetically radical filmmakers.

It is widely thought that NQC was predominantly a gay male film movement, so Club Des Femmes’ event Everything You Wanted to Know about New Queer Cinema but were afraid to ask… will redress the balance with a screening of Lisa Cholodenko’s first film High Art, together with British short film Rosebud, plus a NQC 101 talk.

Other NQC films include a very rare screening of one of the founding films of the movement, Tom Kalin’s Swoon, from 1992, and Isaac Julien’s Cannes winner Young Soul Rebels, from 1991. Both screenings will have queer cultural intros with music and poetry.

One of most fascinating and insightful documentaries at Berlinale this year was Dagmar Schultz’s film Audre Lorde: the Berlin Years 1984-1992. The clever Fringsters have bagged a UK premiere, which is great news both for Audre Lorde fans and for feminists who are interested in finding out more about the women’s movement in Germany pre- and post-reunification.

Lorde regularly visited Berlin over the course of almost a decade and was the inspiration behind the Black German women’s movement (coining the term ‘Afro-German’), as well as the instigator behind the growth of consciousness around racism and white women. The film shows this very interesting, un-told chapter in Lorde’s life and her direct participation in a very turbulent cultural and political moment in Germany’s social history.

The Girls Like Us magazine crew are participating with a programme of short films called Generations Like Us with post-screening discussion between GLU editor Jessica Gysel and the multi-talented London artist and filmmaker Lisa Gornick. Whatever GLU do, they do it well and this event is free, which is even better!

Following on from the GLU screening, photographer and writer Holly Falconer (The Most Cake) will be giving a short talk on Clubbing and Camp: A generation in club photography. Falconer will look at generations of dress and attitude in some of the most notorious queer clubs: from Gateways, Studio 54 and Twat Boutique. Yes, yes, yes, any mention of the infamous Chelsea dyke club Gateways and I’m there.

A late addition to the festival is Madsen Minax’s feature-length rockumentary Riot Acts. The film explores a smorgasbord of trans and genderqueer musicians in their many colours and musical genres. The film is a testament to power of creativity and surely a welcome antidote to having to listen to a constructed, media-hungry mainstream music industry. Post screening there will be a discussion with the newly formed London trans filmmaker group. Go group!

Finally, if daytime seems too staid and something late night and lively sounds even better, then you can do no better than checking out Stav B’s liquor bar’s Dark Room. Short films, some DJs, a hair salon and cocktails: it all sounds too good to be true, wrapped up in an ambiance of the seedy and stylish women’s bars from Paris, Berlin and New York of the 1920s, ’30s and ’40s.

These are just some of the queer-feminist highlights of this year’s festival. Travis Matthews, director of the already sold out opening night film I Want Your Love, could not have put it better: “Hell yes! I couldn’t be more excited about opening Fringe! They’re leading the pack among a growing number of young queer festivals that feel fresh and relevant to a new generation of festival goers.”