‘The face I couldn’t face’

Natalie James is performing at the hip hop dance theatre festival Breakin’ Convention at Sadlers Wells on Saturday. Here she explains her piece 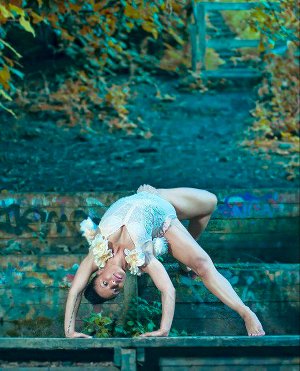 My daughter and I are currently staying in a refuge for women fleeing domestic violence. As a result of an ex partner, my daughter’s dad, we have relocated from another city.

Some days I have doubts, with constant highs and lows. One day I’m getting VIP seating, walking the red carpet with an invite to the premiere of Streetdance 2 3D, with star dancers from the movie.

The next I’m helping police with their investigation into last year’s assault. Then there are general day to day motherly duties such as supporting my daughter’s transition to a new school after missing a whole term due to leaving our home to resettle, and everything that comes with uprooting and trying to move forward.

I’d like to get out of this refuge that I quote “had a choice” in moving to, according to a London local authority borough. The same advisor said: “Well, its not like somebody held a gun to your head”… so they clearly never listened to me or my refuge worker at the time.

This is where my chosen career comes in. I am working on a new solo for Breakin’ Convention 2012 at Sadlers Wells to express how I feel about the whole situation. In a way it’s like therapy.

The piece itself represents my inner and outer scars, wanting to change who I was as I could not accept that this is part of who I am. Revealing what I covered because of how ugly it was, and how I felt ugly inside as a result of someone else’s lack of control.

The piece is called Unrecognisable and incorporates movement, lighting, set design and visual imagery to express my thoughts and feelings. It reflects my feelings about a period in which I didn’t recognise myself.

Through this piece and starting afresh I feel strongly that this is facing the issue head on rather than running away.

I gradually became more and more internally angry and then the inner battle started. ‘It’s too late, no-one will believe me now for sure!’ Eventually it became too much and I needed to deal with it in a way that felt right to me. I just couldn’t live my life with regrets anymore. This was my way of rightly facing this situation… by going head to head and addressing it in a non-physical way.

Going back to the piece, I have performed it twice so far, but in different ways. It definitely wasn’t easy to do and my daughter thought I was crazy when I told her I was working in the studio on my birthday. (When she came back from the sitters she crossed her arms and frowned asking why I didn’t have a party!) Numerous times even today I question myself about presenting it for Breakin’ Convention at Sadlers Wells next week…

Originally the piece was performed in silence, because I wanted to challenge the audience response when an image is projected. The second time I performed to my own spoken word for an event to try help raise awareness for domestic violence (which is how the piece came about).

Last year I did a solo for an event and the bruises were under my makeup (they didn’t know, it was purely coincidence). I was hesitant to agree but after reading the brief I just couldn’t say no, plus I wasn’t going to do a solo or anything personal to my situation….

The picture of my face was the face I could not face at that time and the face that stays with me even now.

I wanted to share through my solo, how – even though I always stood up for myself – I got affected by this inside. I wanted to share how I could forgive a human for doing something that not even animals do to each other, but I couldn’t forgive myself for being human and not having the strength to face the police sooner. How even when I moved to another city and finally got to press charges, the bruise was still with me even if it wasn’t visible.

So many questions came up during the creative process and many of them all aimed at the human mind. What is acceptable to one person may be unacceptable to another… what maybe right to you, maybe be wrong to me and so on,how people as a community can influence a persons perspective of right and wrong. I based my solo on my interpretation of right and wrong, regarding my knowledge of my situation and people I know have been in situations similar, and how things may or may not be different when you yourself are involved.