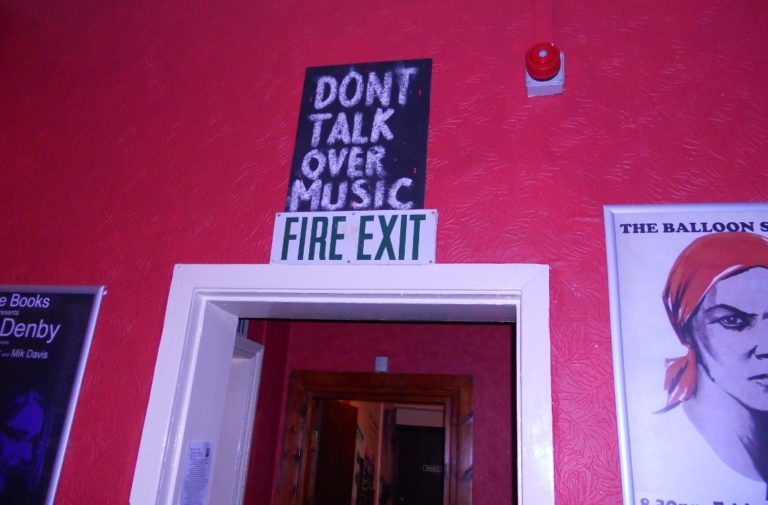 Punk pioneers Viv Albertine (The Slits), Gina Birch (The Raincoats) and Helen McCookerybook (The Chefs) each form an important part of feminist musical history. They reunited for a gig at The Verge in Hyde on 24 March and I’ve just posted Cazz Blase‘s review of the night, along with backstage chat with the three performers. There’s some material from the acts coming up in Cazz’s April playlist. In the meantime, here’s a clip of Helen (who is touring with The Daintees at the moment) performing at Camden Eye this year, followed by a taster of Cazz’s review of the Hyde gig:

…After the gig I am fortunate enough to speak to all three women about both the performance and their future plans.

Although it is the first time the three have played in Hyde, they have all performed together before, at a gig in Gateshead with Pauline Murray, formerly of Penetration and The Invisible Girls.

We discuss the audience and the mild sense of disappointment that more women hadn’t attended. The gig has been promoted as celebrating sisterhood after all.

“I was on edge tonight,” explains Gina, “and I thought it would be more interesting, on the whole, to women – people in general – who might be interested, not in the punkier side of us, but the more arts-school-experimental side of us. Sometimes when you have a room full of…” she breaks off and adds: “I shouldn’t say this, [she shouts] BLOKES DRINKING PINTS, you think they’re probably more into UK Subs than The Raincoats.”

“Ah,” interjects Helen, “but they enjoyed themselves tonight.” All pictures supplied by Cazz Blase and shared under a creative commons licence. The first shows a “Don’t talk over music” sign in chalk on blackboard on a dark pink wall above the door at The Verge. The second shows a casual shot of Gina Birch (left), Viv Albertine (centre) and Helen McCookerybook (right) offstage at the venue.