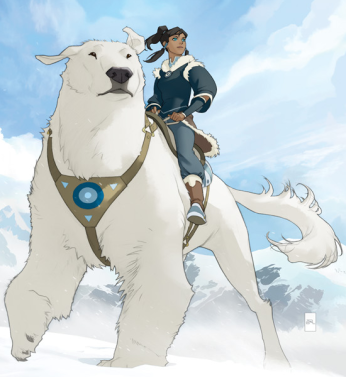 The Legend of Korra

Following on from Katniss Everdeen and the Hunger Games, here’s another female action hero to get excited about:

That’s Korra. The next Avatar. And her show, The Legend of Korra, just started in the US.

More info over at Wired. Interestingly, the show’s creator explains that this won’t be an easy split between good and evil. Korra is the heroine – but she’s also the most powerful person on the planet, and she is put in opposition against people without any special powers fighting against being oppressed:

“We wrote the first season of The Legend of Korra well before the Occupy Wall Street movement, but there you had a large group of people who felt powerless up against a relatively small group of people in power,” DiMartino said.”For me, these ideas resonate with what’s going on in the world today. With technology growing and accelerating at a pace we can barely keep up with, what is the role of tradition? I’d love for kids to see that their lives don’t have to be controlled by technology, that it’s cool for them to go play outside and use their imagination!”