17 May – International Day against Homophobia and Transphobia

Today ILGA-Europe launches its first Annual Review of the Human Rights Situation of Lesbian, Gay, Bisexual, Trans and Intersex People in Europe 2011 supplemented by the Rainbow Map. These documents are intended to offer an overall picture of the current status of the human rights of LGBTI people in Europe.

From a legal perspective, the ILGA-Europe Rainbow Map shows that none of the countries in Europe can claim to provide full legal equality for LGBTI people and, on average, the level of legal equality continues to be very low in most countries.

Progress has been uneven, to say the least – at its best, there is increased recognition of the grounds of sexual orientation and gender identity, particularly in the fields of asylum and protection from violence. Various countries continued moving towards the extension of legal recognition and equal rights to rainbow families; and there are a number of legal proposals towards the introduction of humane laws regarding the change of legal name and gender of trans people.

However, on the negative side, in some countries there is either no progress, or worse, there are moves towards the adoption of legislation criminalising the ‘propaganda of homosexuality’.

While the publication of this kind of research is broadly to be welcomed, and as eye-catching as the rainbow map is, it may be considered problematic in its conflation of LGB, TS/TG and Intersex issues. Note also that intersections of race, class, disability, etc, are not clear; nor is it recorded whether subjects are binary or non-binary identified. 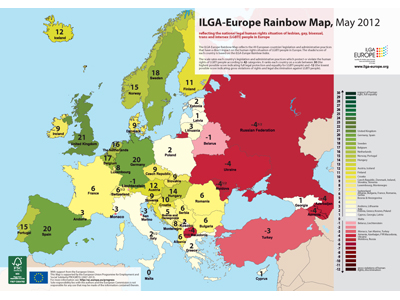 Download the ILGA-Europe Rainbow Map and Index, May 2012 here