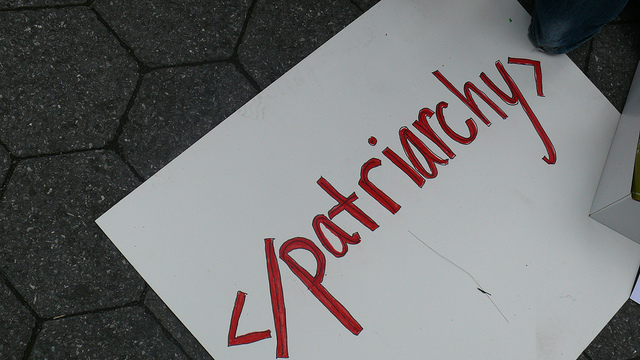 I expect many of you will be familiar with the recent Observer article by Elizabeth Day about philosopher David Benatar’s claims that “sexism against men is a widespread yet unspoken malaise.” (You may also be familiar with Suzanne Moore’s response, along with Rhiannon and Holly of Vagenda’s piece mentioning the book alongside other related issues.)

This notion doesn’t seem to be unspoken to me. If anything, it’s something I see a lot online, usually in response to a mention of sexism against women. While the “sexism” tag is often little more than a derailing attempt to preserve traditional roles, it’s clear those traditional expectations are oppressive to men as well as women. Jo T touches on this when introducing her own critique of Day’s article:

There’s no denying that men are oppressed by certain cultural norms. These tell them that they shouldn’t openly express their feelings, that there is only a very limited way to perform masculinity in an ‘acceptable’ way and that disagreeing with dominant tropes about what is and isn’t ‘manly’ can lead to very unpleasant consequences. I read No, Seriously, What About Teh Menz and agree with a great deal of what is said there, about men, ‘manliness’ and the problems unique to men in a patriarchy. I also find Tony Porter’s TEDWomen speech on the pernicious and damaging “man box” to be moving, and accurate, and highly pertinent.

However, as the section of the men’s rights movement which hates women gains ground in online spaces, the recent Observer article by Elizabeth Day on the subject not only seems disingenuous but also potentially dangerous. Indeed, it all but concedes the vast majority of the anti-feminist talking points pushed by men’s rights activists (MRAs). Before I begin, I should point out that Melissa at Shakesville has done a superb job of explaining many of the article’s problematic aspects, not least that “it ain’t women who are the primary gatekeepers of that bullshit [i.e. patriarchy]. It’s other men.”

The headline and standfirst of the article are bad enough: if women and girls were merely “lagging at school” and “the butt of cruel jokes”, rather than victims of systemic violence and inequality, we’d count ourselves damn lucky. The piece then begins by setting out the usual tedious MRA talking points about the “supar sekrit!” oppression of men, using arguments promulgated by Professor David Benatar and men’s rights author Warren Farrell. This is followed by a paragraph giving half a dozen examples of the oppression men supposedly face. In my opinion, these mislead the readers by omitting various highly relevant pieces of information and context…

Picture shows the HTML for “end patriarchy” written in red pen across a white sheet that is placed on a pavement and tilted diagonally upwards into the top righthand corner. By ctrouper. Shared under a creative commons licence.